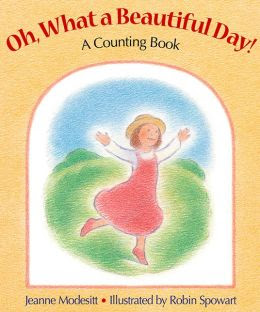 Oh, what a beautiful day! One pig is prancing. Two ducks are dancing. Three chicks are cheeping.

I really love this one! It is charming; it is lovely. A cozy, gentle counting-to-ten book starring a young girl who's enjoying life. I love her "And I'm a part of it all." The illustrations are soft, sweet, and oh-so-perfect for this kind of book. 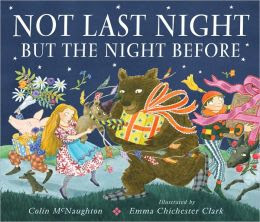 Not Last Night But The Night Before. Colin McNaugton. Illustrated by Emma Chichester Clark. 2009. Candlewick. 32 pages.

Not Last Night But the Night Before is quirky. It is imaginative; it celebrates plenty of nursery tales (Little Miss Muffet, Little Bo Peep, Three Blind Mice, Three Little Pigs, Goldilocks and the Three Bears, etc) throughout the text. The illustrations reveal even more of the story. (The company makes an even bigger mess perhaps than the Cat in the Hat.) It's rhythmic. It's a bit crazy. You'll either love it or hate it, I suppose! 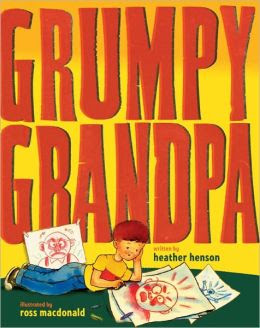 The little boy narrating Grumpy Grandpa is a little scared of his grandpa. He's come with his family to stay for two whole weeks. He can't imagine why anyone would come to spend time with someone who is just grumpy no matter what. But during this visit, the little boy learns a little more about his grandfather. And the two do become friends. 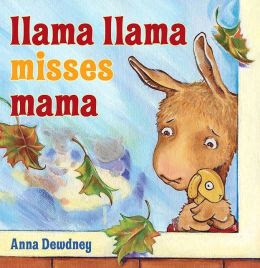 It is Llama Llama's first day of school. And will there be llama drama? Yes. But not as much as you might expect considering some of his tantrums in previous books. 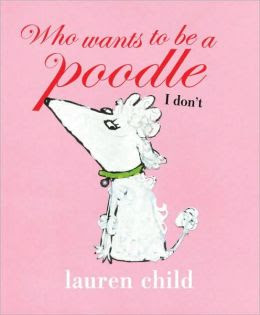 Trixie, our heroine, does NOT like her name. She wants to be an ordinary dog. She does not want to wear clothes or be styled or groomed all the time. She wants to be like all the other dogs. She wants to be free to step in puddles, among other things. But how will she ever convince her owner? This picture book is all about being misunderstood and finding your voice anyhow.

I thought the design of the book kept it from being reader friendly. It is hard on the eyes to have black text on dark backgrounds--like brown or dark gray. And perhaps it's fun or cute to have the text wrap around in circles and such, but I found it annoying.