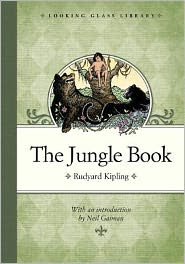 The Looking Glass Edition published by Random House in 2012 and featuring an introduction by Neil Gaiman includes the following stories and poems in its edition of The Jungle Book: Mowgli's Brothers, Hunting Song of the Seeonee Pack, Kaa's Hunting, Road Song of the Bandar-Log, How Fear Came, The Law of the Jungle, Tiger-Tiger!, Mowgli's Song, Letting in the Jungle, Mowgli's Song Against People, The King's Ankus, The Song of the Little Hunter, Red Dog, Chil's Song, The Spring Running, The Outsong, Rikki-Tikki-Tavi, and Darzee's Chant. Essentially readers get nine stories and nine poems that were originally published in the Jungle Book and the Second Jungle Book. These stories were published in 1894 and 1895.

For better or worse, this publication excludes The White Seal, Lukannon, Toomai of the Elephants, Shiv and the Grasshopper, Her Majesty's Servants, Parade Song of the Camp Animals, The Miracle of Purun Bhagat, A Song of Kabir, The Undertakers, A Ripple Song, Quiquern, and Angutivaun Taina. These stories and poems were also included in the original publications of the Jungle Book and the Second Jungle Book. I haven't read the excluded stories, so perhaps the editors did choose the best of the best to represent Rudyard Kipling's The Jungle Book.

If I had to choose just one word to describe the Jungle Book, it would be DIFFERENT. It is an adventure story, and adventure stories are not uncommon. But even in its writing--the language, the sentence structure, the flow, etc.--it is different, or, unique. Almost all of the stories in this newly published edition are about Mowgli, a young boy raised by a pack of wolves in the Indian jungle. He was accepted into the wolf pack and two other animals had a hand (so to speak) in bringing him up: Bagheera, a black panther, and Baloo, a bear. Many stories stand on their own as separate adventures. Some stories focus on the dangers within the jungle that Mowgli faces--the monkey, the tiger Shere Khan, the cobra king, the dhole, etc. Some stories focus on the dangers Mowgli faces from outside the jungle, mainly the nearby villagers led by Buldeo.

The main animals readers get to know are: Bagheera, Baloo, Kaa, Hathi, and Akela.

The Jungle Book isn't exactly my kind of book. These are not the kind of stories that excite me.