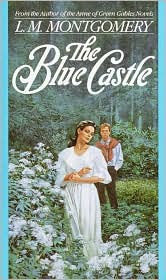 If it had not rained on a certain May morning Valancy Stirling's whole life would have been entirely different. She would have gone, with the rest of her clan, to Aunt Wellington's engagement picnic and Dr. Trent would have gone to Montreal. But it did rain and you shall hear what happened because of it.

The Blue Castle is a giddy-making romance by one of my favorite authors, L.M. Montgomery. I LOVE so many of Montgomery's books, but this one is one of my favorite favorites. One of those perfectly perfect books. For readers who don't appreciate old-fashioned, sweet romances, it may not be exceptional. But for me, it is near perfect!

Valancy Stirling is the heroine. An uncomfortable birthday is approaching, and she's never been in love, never even come close to falling in love. She hates the teasing she receives from her family because of her unmarried status. Hates it not only because it's rude, but because she longs for love, and aches for a happily ever after. She hates how everyone takes her for granted, how no one ever shows her any real consideration.

So one day Valancy decides to go to a doctor--a man who was not the official family doctor--with her symptoms of heart pain and palpitations. A family emergency calls the doctor away before he can share his diagnosis with her, but a letter arrives in the mail a few days letter, a letter with shocking news. SHE IS DYING. There are two things Valancy decides: 1) she will never, ever tell her family the news and 2) she will make all her own decisions and will start LIVING each day as if it were her very last.

The change in Valancy is oh-so-sudden and oh-so-shocking. The new Valancy has a voice, a loud voice, and a rebellious spirit. She will do things her way from now on. One of the first decisions she makes is that she will nurse a dying relative, Cissy, who is in disgrace with the family. She will keep house for "Roaring Abel." It is in her new position that she first meets Barney Snaith. And it is LOVE. The old Valancy would never have met him, would never have dared talk to him, but the new Valancy? Well, she has NOTHING to lose! So the two become friends--good friends. After Cissy's death, Valancy decides to take a big risk:

"I thought I'd run down and ask if there was anything I could do for you," said Barney.
Valancy took it with a canter.
"Yes, there is something you can do for me," she said, evenly and distinctly. "Will you marry me?"
For a moment Barney was silent. There was no particular expression on his face. Then he gave an odd laugh.
"Come, now! I knew luck was just waiting around the corner for me. All the signs have been pointing that way today."
"Wait." Valancy lifted her hand. "I'm in earnest--but I want to get my breath after that question. Of course, with my bringing up, I realize perfectly well that this is one of the things 'a lady should not do.'"
"But why--why?"
"For two reasons." Valancy was still a little breathless, but she looked Barney straight in the eyes while all the dead Stirlings revolved rapidly in their graves and the living ones did nothing because they did not know that Valancy was at that moment proposing lawful marriage to the notorious Barney Snaith. "The first reason is, I--I"--Valancy tried to say "I love you" but could not. She had to take refuge in a pretended flippancy. "I'm crazy about you. the second is--this."
She handed him Dr. Trent's letter.
Barney opened it with the air of a man thankful to find some safe, sane thing to do. As he read it his face changed. He understood--perhaps more than Valancy wanted him to.
"Are you sure nothing can be done for you?"
Valancy did not misunderstand the question.
"Yes. You know Dr. Trent's reputation in regard to heart disease. I haven't long to live--perhaps only a few months--a few weeks. I want to live them. I can't go back to Deerwood--you know what my life was like there. And"--she managed it this time--"I love you. I want to spend the rest of my life with you. That's all." (127, 128)

Will Barney say yes?! Will Valancy have her one happy year of real living, of JOY?


Valancy never persisted. She was afraid to.

Reality pressed on her too hardly, barking at her heels like a maddening little dog.

Dr. Trent was over seventy and there had been rumours that he meant to retire soon. None of the Stirling clan had ever gone to him since he had told Cousin Gladys, ten years before, that her neuritis was all imaginary and that she enjoyed it. You couldn't patronise a doctor who insulted your first-cousin-once-removed like that--not to mention that he was a Presbyterian when all the Stirlings went to the Anglican church. But Valancy, between the devil of disloyalty to clan and the deep sea of fuss and clatter and advice, thought she would take a chance with the devil.

Fear--fear--fear--she could never escape from it. It bound her and enmeshed her like a spider's web of steel.

"Fear is the original sin," wrote John Foster. "Almost all the evil in the world has its origin in the fact that some one is afraid of something. It is a cold, slimy serpent coiling about you. It is horrible to live with fear; and it is of all things degrading."

"'If you can sit in silence with a person for half an hour and yet be entirely comfortable, you and that person can be friends. If you cannot, friends you'll never be and you need not waste time in trying.'"

Great review! I may not have been blown away by this sequel compared to the first book, but I still loved it regardless.