Once upon a time there was a pond that was home to a family of frogs. It was their pond. And they were very happy living there. But one morning they discovered a surprise visitor...

I enjoyed Ribbit! I loved the illustrations of this adorable pig. This is the 'surprise visitor' who decided to visit the pond and make some new friends. The frogs didn't quite understand why the pig was there. They were very suspicious and extremely hesitant...at least at first. Really liked the ending of this one--with the pig up in the tree making new friends! 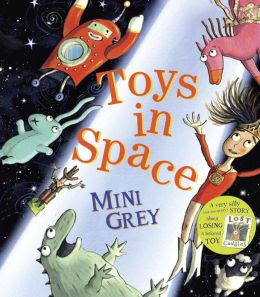 That summer night, for the first time, the toys were left outside. The sun went down, the sky grew dark, and, for the very first time...the toys saw THIS. Everyone was quiet for a while.

Toys in Space is silly and creative. I'm not sure if it would work for a group read-aloud, it was quite text-heavy. But I think it would definitely work as a read-aloud for parents to read to their own children. (They might want to read it first, however. I didn't like some of the language in this one: dang, stupid, ninny, etc. But every person has a comfort level of course! So what works for one might not work for another.) 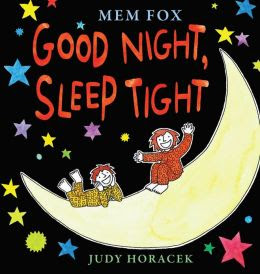 One Friday night, Bonnie and Ben were being looked after by their favorite babysitter. Skinny Doug leaned against their bedroom door and said:

"Good night, sleep tight.
Hope the fleas don't bite!
If they do,
squeeze 'em tight
and they won't bite
another night!"

I enjoy the premise of this one. A babysitter telling nursery rhymes to two children as he tries to put them to bed at night. (I'm not sure he was trying too hard at the beginning!) After each rhyme he says: "I'll tell you another I heard from my mother..." I appreciated the fact that it wasn't a book about a babysitter reading these rhymes to the two kids. I liked the fact that these were rhymes that had stayed with him and were a part of his life, his memory. The book celebrates imagination, language, and childhood itself perhaps. 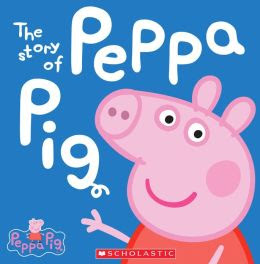 Once upon a time, there was a lovable, slightly bossy little piggy named Peppa. Grunt! Grunt! More than anything in the whole wide world, Peppa loved jumping up and down in muddy puddles.

If you or your little one LOVES Peppa Pig, then this one is one to consider. I do love Peppa Pig. I love Peppa's whole family. The show is just so much fun: the music, the characters, the silly stories. The book isn't quite as much fun as the show itself, but it captures some of the magic. 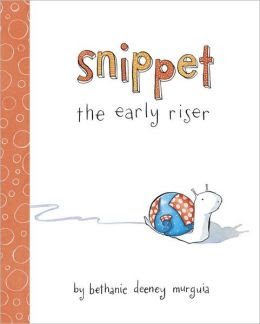 In many ways, Snippet was an ordinary snail. He drew on the sidewalk. He made leaf sculptures. He played soccer. He especially adored piggyback rides. At bedtime, he would snuggle inside his shell and fall fast asleep. But while his family loved to snooze all morning, Snippet did not.

Snippet loves to wake up early. His father, mother, and sister DO NOT like to wake up early. Snippet does everything he can think of to make them wake up. He really wants to play! But still, his family stays asleep. Other insects offer advice on how to best wake them up, but it is the caterpillar's advice that works--at least this one morning! Snippet is a lovable character. Very charming! And I definitely enjoyed the illustrations!