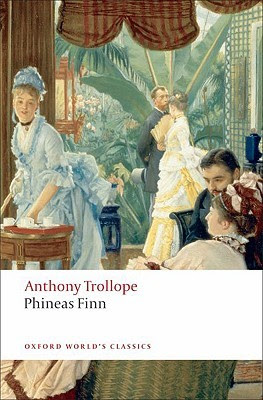 If I had to give a brief summary: Phineas Finn is an incredibly-handsome young man with "luck" on his side. He's "fortunate" to achieve a seat in parliament so young especially since he's not got much money of his own. There are those, of course, who think that this deal is too good to be true, that Finn hasn't "earned" his political success and that he isn't grounded enough to handle it. But Finn is good to listen only to those who flatter him. Much of the novel focuses on Phineas Finn's handful of years in parliament. The years where he listens to his elders and does what he's told as far as voting goes. But at least a third of the novel is focused on Finn's love life, or, his love interests. There are essentially three different women whom he at one time or another "loves." Readers also spend some time with a very wealthy widow who's definitely in love with Phineas Finn.

Phineas Finn isn't the first Trollope novel to explore women's roles or women's options. I am so glad that Lady Laura was in the hands of Anthony Trollope instead of Thomas Hardy! Readers meet a young woman too scared to marry for love. She sees that she is falling in love with Phineas Finn. He's poor, ambitious, and his future is so uncertain. When Robert Kennedy proposes, she accepts. She thinks that her match will be safe enough. She may never "love" Robert, but she doesn't fear him exactly. But that was before the marriage. Robert Kennedy is NOT Plantagenet Palliser OR John Grey. Their unhappy marriage is one of the main focuses of the novel. Lady Laura regrets her foolishness every single day, and her heart breaks as she sees Phineas Finn fall in and out of love with other women for her love has remained constant.

Violet Effingham is another love interest of Phineas Finn. Unlike Lady Laura, however, Violet never finds herself "in love" with Phineas. She enjoys his company, especially in a crowd when he isn't so intent on getting her alone. But Violet is suffering in a different way from Lady Laura. Her heart tells her to go ahead and marry Lord Chiltern (Laura's brother, Phineas Finn's good friend). She's known him most of her life. But her head KNOWS him as well. She knows that he isn't always responsible, wise, considerate, or "good." He has done some foolish things in his life; some just a little foolish. Part of her wants to "fix" him, wants to believe that he can be fixed, that he can be changed, that they can be happy together as man and wife. The other part of her says RUN.

I definitely enjoyed this one. I wouldn't say I loved it, however. While I found some of the characters--especially the women--interesting, I had a hard time really "loving" Phineas Finn the same way that I have loved other Trollope heroes in the past.


I never knew a government yet that wanted to do anything.

It's very little that ever is done, and that little is generally too much.

It was considered that the speech in which Mr. Daubeny reviewed the long political life of Mr. Mildmay, and showed that Mr. Mildmay had been at one time a bugbear, and then a nightmare, and latterly simply a fungus, was one of the severest attacks, if not the most severe, that had been heard in that House since the Reform Bill.

They're for promising everything before they's elected; but not one in twenty of 'em is as good as his word when he gets there.

"There are moments, Robert, when even a married woman must be herself rather than her husband's wife. It is so, though you cannot understand it."

"For myself," said Mr. Palliser gravely, "I think I may say that I always am really anxious to carry into practice all those doctrines of policy which I advocate in theory."

I suppose there must be government. But the less of it the better.

Talk of love! I tell you, sir, that your heart is one in which love can have no durable hold.

"Must we be strangers, you and I, because there was a time in which we were almost more than friends?"

There is nothing in the world so difficult as that task of making up one's mind.

"What man likes to be denied anything by a woman at any age? A woman who denies anything is called cruel at once,—even though it be her very soul."

Hmmm, I think I might have to think I would love it before delving into its 752 pages. All I've read by Trollope is the first 2 in the Barchester series. I liked them, but they were relatively short.