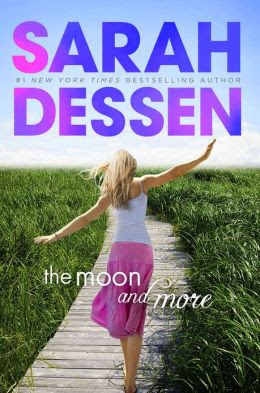 While The Moon and More isn't my new favorite Dessen novel of all time, it was WONDERFUL to spend time with new characters in the beach town of Colby. What I love about Dessen's YA novels is the fact that relationships--ALL relationships matter. Family relationships and friendships are typically very important in her works. This one was no exception.


Emaline, our heroine, has a steady job, a steady boyfriend, Luke, and a steady (blended) family. Her stepfather has raised her since she was two, and he is her DAD. She can't imagine not having two stepsisters, Margo and Amber. Though each sister can drive her crazy! And her mom, well, her mom is her mom. There's some awkwardness now and then as her mom's good intentions are not quite appreciated as intended. But Emaline knows her family is good and strong. Her relationship with Luke seems steady enough as well, at the beginning. They've been together since ninth grade! But there has been increasing awkwardness between them as well, ever since her mother caught them together in a compromising situation. Morris and Daisy are Emaline's BEST FRIENDS. And I love that these best friends play such a huge role in this novel! Emaline's job isn't horribly fun or exciting, but, it's a job--a job that brings her into contact with some cranky people. Then again, it also brings Theo into her life.

Theo and Ivy are SOMETHING. Ivy films documentaries, and she's in Colby to get the story behind local artist, Clyde Conaway. Theo is her assistant. He's only a few years older than Emaline, and he's so very, very different from all the guys Emaline has ever known. When Theo isn't being abused or pushed around by Ivy, he's making much of Emaline. He's determined that she is key to his "BEST SUMMER EVER."

For those wanting a magical romance, I'm not sure this one will fully satisfy. But that is what makes The Moon and More so great. It is a novel about growing up in a messy world and accepting life as it is. For Emaline that means feeling CONFUSED and uncertain about her biological father. One thing is certain: she loves her half-brother, Benji. But her father, well, he said he would pay her college tuition, he encouraged her--almost pressured her--to apply to BIG schools. When she let him know the good news that she was accepted at Columbia, he promptly disappointed her.  So her "big dream" won't be coming true at summer's end.

I loved this one for the characterization. I loved it because it was complex with no easy answers.


There's a difference between the words father and dad. And it's more than three letters.  (25)