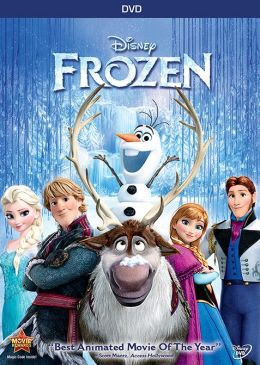 I don't know how to talk about Frozen without including spoilers. So if you plan on seeing the movie and don't want to know anything at all about it, then skip this post.

I love Frozen. I do. I love the music of Frozen. I love singing along with Frozen. I also love thinking about the film and how it all fits. I like seeing Frozen as part of a progression. In other words, how far has Disney come since Snow White? In terms of characterizations, in the qualities of heroes and heroines, in matters of the heart (and head). I think Frozen goes beyond even Enchanted in reacting to the extremes.

For example, early Disney films (Snow White, Cinderella, Sleeping Beauty, etc.) there is a certain pattern. There is an expression of longing, waiting, wishing--all done in song of course! (Snow White's "I'm Wishing," Rapunzel's "When Will My Life Begin," Ariel's "Part Of Your World") "True Love's Kiss" from Enchanted is a great example.  Frozen has two such songs early in the film. "Do You Want To Build A Snowman?" expresses her longing for a relationship with her sister, and, "First Time In Forever" expresses her longing for romance and a chance to find "the one."

There is certainly a sameness to early Disney heroes or princes. One must be "a prince." One must be able to dance. One must be able to sing--or at least be able to sing a song in one's head. Being able to ride a horse is a plus as well. And then there is the whole stand there and look handsome bit. Disney princes spent decades being fractionally dimensional as characters. (Does Cinderella's prince ever say a word outside of echoing Cinderella in  "So This Is Love"? Snow White's Prince does have a song of his own. It's a simple song, it's true, but heartfelt.)

Prince Hans is the perfect Disney prince. From the moment he appears on screen, viewers can see the potential. He's handsome. He is gentlemanly. He can dance. He can sing. (He has a horse.) "Love Is An Open Door" sums up decades and decades worth of love and romance Disney style.

Anna, one of the heroines, is impulsive, loving, trusting, clumsy, lonely, desperate, talkative, and sweet. She has led a sheltered life, a lonely life, an in-her-own-head life. She's immature and needy, but, kind and sweet and tentatively assertive. There are times when she steps up and acts. She is NOT ready for marriage. She thinks she's ready. But she's not. Not even close. When a person is already so in love with the idea of being in love and finding true love on this oh-so-special, once-in-a-lifetime night, one can be easily persuaded that the other person feels exactly the same way. Such is the case in Frozen.

Honestly, I'm not sure there is any foreshadowing whatsoever in regards to Prince Hans. And I haven't decided how I feel about that. Prince Hans is either a) a professional con man and an incredibly gifted actor who can fool anyone and everyone b) an all too human prince who saw an opportunity and grabbed it. Disney's villains are usually so outspoken and obvious.

But Frozen isn't about Anna and Prince Hans. About "finding" or "losing" that one true love. Frozen is a film about sisters, about love, about how everyone is a bit of a "fixer upper." (I love the "Fixer Upper" song.)

Both Anna and Elsa have a LOT to learn about love, but it isn't primarily romantic love. The film asks, what is love, and gives several different answers...

I love the characters. I do. I love Sven and Kristoff. I love Olaf. I love Anna and Elsa. I love the trolls! Well, most of the trolls. (I do think that the main troll gave bad advice at the very beginning of the film.)

Lets face it, Frozen is a beautiful film, both visually and emotionally, and if we're going to go for songs, most people will pick Let It Go. The animated sequence. the lyrics and the Elsa's acceptance of herself all come together so well, it's impossible to forget, and catchy too :)

Frozen is such a fantastic movie, one of my favorites! Right up there with Rise of the Guardians!

I think Prince Hans saw his opportunity and grabbed it, but I have no doubt that he was always capable of deception and betrayal. My sister's first suspicion of him is when he let Anna go out alone after Elsa. No protection, nothing. Most Disney princes would never do that. His change was a shocker for me though, totally never saw it coming.

We finally watched FROZEN on Wednesday because we were having a blizzard! I figured it was only fitting. :) I really liked it. I was surprised by how the guy didn't save the day in the end. I found that very refreshing!

It is a beautiful film - probably not my all time favourite but it is visually stunning. I think I need to watch it again though.
Lynn :D

Great review! I loved Frozen as well, even though the musical beginning had me roll my eyes a couple of times.
As for the prince, what he did in the end shocked me and made me like the movie even more because it veered of in an interesting direction.
Olaf was my favorite character. I found him adorable and loved his optimism. I think we all need an Olaf in real life. :)

Such a wonderful, beautiful film, and you have a great discussion here on how it's an evolution of earlier Disney movies. And with that in mind, one of my favorite lines is when Elsa tells Anna, "You can't marry someone you just met today!"

I was taken completely surprise by Hans' betrayal, and I can't think of any real foreshadowing, looking back. I do recall when they sang together, he started a sentence, "it's like we finish each others--" "Sandwiches!" Anna filled in, and Hans just agreed with that, though I assume that wasn't what he was going to say! Still, that's not much of a hint that he was leading her on all along...