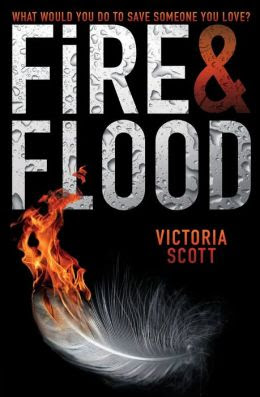 Did I love Fire & Flood by Victoria Scott? Not exactly. I neither loved it or hated it. I was completely indifferent to it. I would say it is more plot-driven than character-driven. I would say that it is a quick read, but, perhaps more forgettable than memorable when all is said and done. I'll also say that I never once thought of stopping while I was reading it. I wanted to stick with it and find out what happened.

Tella, our heroine, LOVES her brother, Cody. Unfortunately, Cody is dying and there is nothing to be done for him. Or so readers (who avoid blurbs) are led to believe in the opening chapters. It seems Tella, and Tella alone, can TRY to save her brother by participating in the oh-so-mysterious survival game called Brimstone Bleed. The ultimate winner of the games will receive THE CURE which will provide one person with a cure for any disease. In Tella's case, it will be for her brother, Cody. But not all participants are doing this for siblings.

The games are NOT public knowledge though they've apparently been going on every six years for several decades now. Those who survive the game are NOT allowed to speak of what occurred during the games. It also seems the game has a curse-aspect to it. Those that have been invited to participate are related to others who have endured the games. Apparently, Tella's mother has a secret!

So Tella's invitation to participate arrives suddenly. She's barely heard the message when her parents intervene oh-so-dramatically. They try to destroy the device that delivered the mysterious invitation. They fail. (It would be a short book if they'd succeeded!) Tella decides to defy her parents (not a surprise) and follow the instructions and become a contender. Tella realizes that she is one of hundreds participating in this game. There will be only one winner. She's not sure what--if anything--happens to those who fail. There is not a sense of doom like in Hunger Games. And the games do not in any way appear to be publicized.

Each participant chooses an egg--a pandora. The pandoras, when hatched, reveal themselves to be various mutant animals with magical powers, of course. Without pandoras, NO contestant could hope to survive all the challenges.

Tella's pandora is probably the most interesting pandora. A shape-shifting fox that can read her mind.

What would a survivor-based game be without romance?! So of course, Tella has several guys interested in joining her during the challenges...