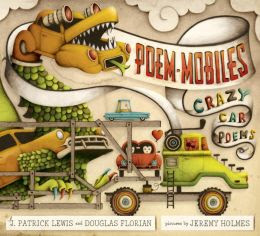 Without a doubt my absolute favorite is "The Giant Bookmobile of Tomorrow." This little poem is ABSOLUTELY delightful. It is just a gem of a poem, and chances are an instant favorite with librarians everywhere! There is probably a good reason why this poem is at the start! Just open it up, read it, and it might just hook you. I think it's the kind of poem that will appeal to readers even if they "don't like" poetry. The other poems, well, I'm not sure they're equally appealing to non-poetry-readers. But this one, all you have to do is LOVE books, and it's sure to delight!

Some poems are enjoyable because they are silly and playful and use language in a fun way. Some beg to be read aloud. Other poems, however, I didn't quite get as enthusiastic about. Probably the funnest poem title to read aloud is "Sloppy-Floppy-Nonstop Jalopy." I also enjoyed "Hot Dog Car" and "The Banana Split Car."

Hi Becky! I'm also a book/movie reviewer who's just starting out and keeping up with my blog on a weekly basis. This post has inspired me to write about and review some children's poetry books that I grew up with as a kid :) I love seeing poems for kids that have actual thought and effort put into them, instead of just a bunch of lazy rhymes that don't try to challenge children a little bit as readers.

Hey, Becky, I tried to write to you but am not sure I had the right address. Did you get an email from me? If not, would you mind emailing me so I can write back to the proper address?