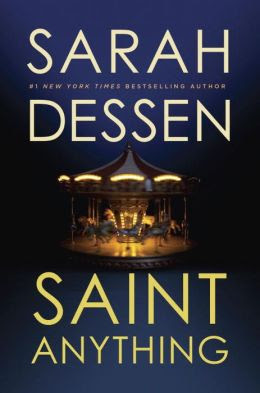 Saint Anything is the newest YA romance book by Sarah Dessen. I've read almost all of Dessen's novels, and I've enjoyed them all. Some I've LOVED. Some I've merely "really liked." I enjoyed

Sydney is the heroine of Saint Anything. Sydney's year will be one of adjustment. Her brother, Peyton, is newly sentenced to a prison term. (While drunk, he ran over a kid on a bicycle.) Sydney's mom is all about Peyton, for better or worse. It would be one thing if this was a recent development, if her concern, her above-and-beyond concern, was based on his behavior, his great need. But that's the way it's always been, at least according to Sydney. Peyton has always, always been THE ONE her mother has given all her time and attention to. As for Sydney's dad, well, he's not as bad as her mom certainly, but, he's not really giving full emotional support to his wife or his daughter. Then again, he's only human, and he has feelings to process too. I think he's making some effort, but, probably putting his wife's needs first. That being said, did I "like" her parents? Not for the longest time. I thought they were oblivious.

So Sydney decides to change schools and make some new friends. And predictably--for a Dessen novel--these new friends are WONDERFUL and AMAZING and allow Sydney to become comfortable in her own skin for the first time ever. She meets the Chatham family, owners of Seaside Pizza. She becomes best, best friends with Layla Chatham; she falls madly in love with Mac Chatham. (Readers also get to meet the parents, and an older sister, Rose, in addition to Layla's other friends, and Mac's bandmates.)

There are, of course, plenty of dramatic moments. And the romance isn't rushed, which is nice. I love the depth of the characterization. It is what I've come to expect from Sarah Dessen, of course, so no surprises. But it's always wonderful to see a book with human characters, and it's something that should always be mentioned when it's done well.

Saint Anything is predictable in some ways. I can't say that I was surprised by anything in the plot. But that's not a bad thing, or not always a bad thing. It can actually be quite wonderful to come to a book knowing exactly what to expect and knowing that you won't be disappointed.
Saint Anything. I didn't love, love, love it. But it's easy to say that I really liked it.