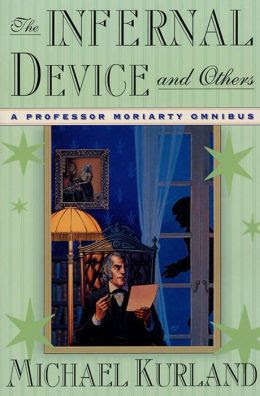 I'm caught up on watching Sherlock, but, far from caught up on reading Sherlock--original Sherlock especially. Still when I saw that Moriarty had his own series, well, I had to check it out from the library. In The Infernal Device readers meet Professor Moriarty and his journalist employee, Barnett. (Moriarty having recently "rescued" Barnett from an Eastern prison and certain death--he was framed for murder--he's in Moriarty's debt--or employ--for two years.) How does Barnett like Professor James Moriarty? He admires him, respects him, enjoys his company. Does Barnett see the "real" Moriarty? Or is Moriarty keeping his darker side from his new friend and employee? Certainly Moriarty is aware that there are a handful of people--namely Sherlock Holmes--who thinks Moriarty is pure evil. But convinced, Barnett is not! Holmes does make a handful of appearances in this one. In fact, to solve the mystery, they may have to join together temporarily to save the monarchy.

Readers spend time with both men as the mystery unfolds. The Infernal Device is a mystery with plenty of politics and action.  Did I love it? Well, if I didn't love, love, love it, I certainly LIKED it well enough.

I also enjoyed reading the second in the series, Death by Gaslight. While I didn't rush through it like I did Infernal Device, I found it mostly compelling. It is set two years after The Infernal Device. Barnett has finished--just finished--his "required" time working for him, but, he has no thoughts of leaving Moriarty's service. He's enjoying himself much too much. Life is rarely boring, and, he's even had time to fall in love...

Can Moriarty catch a serial killer? Someone is killing aristocratic gentleman--in their homes, in locked rooms. With only a few clues, can he solve the mystery, find the killer, and see that justice is done? Can he do a better job than the police? a better job than Sherlock Holmes? Perhaps. Especially since Holmes spends nearly the entire book absolutely convinced that Moriarty is behind each and every murder.

I enjoyed this one too. I look forward to reading more books in this series at some point.

Hi - I nominated you for the Beautiful Blogger Award. I follow you on Bloglovin' and read your reviews quite often.

These sound fun -- a bit of a different take on Sherlock.

Thanks for playing along with British Isles Friday!