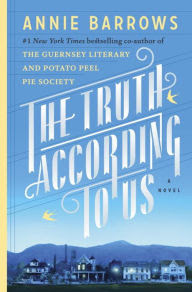 I'm tempted to say that The Truth According To Us would have made a better movie than a book. Or perhaps just that I would have been more likely to appreciate the story as a movie than I did as a book. I found the book to be long, a little too long. And the characters? Well, while they all started out with the potential for me to actually care about them, ended up falling short. Of course, you may feel differently.

Here is what the story is about:

1) Willa Romeyn is a child who has decided to become observant of the adults in her world. She's determined to be a people-watcher and find out secrets big and small.

2) Jottie Romeyn is Willa's aunt and probably primary caretaker. She lives with her brother, Willa, and Bird (her other niece). She runs the town's boardinghouse. She has a tragic back-story that perhaps is supposed to be the big mystery of the entire novel? Regardless, there are so very many flashbacks from her point of view, specific recollections of conversations and events.

3) Layla Beck is the new boarder at Jottie's boardinghouse. She thinks she's all grown up and independent. And in a way, she is. But she has SO MUCH to learn. The book is perhaps weighed down--in my opinion--by all of Layla's correspondence. Letters from Layla to her family and friends, even her ex-boyfriend. Letters to Layla from the same. Her job, her first-ever job, is to write the town's history. (The town is Macedonia, West Virginia.) The history will be for the Federal Writers' Project. She spends most of her time falling in lust, I mean "love" with Willa's father. But also, of course, interviewing residents of the town.

4) There are other characters, of course, like Sol and Emmett that readers get to know. Sol was a childhood friend of Felix (Willa's Dad) and Jottie. (Also there is Vause.) These characters mainly connect with Jottie and Layla.

There were so many characters competing to be the narrator in this one. I didn't properly connect with Jottie, Layla, or Willa. If the story had been from one perspective, perhaps I could have made a good, strong connection. Willa's story could have been about the threat of her father remarrying and life changing and general coming-of-age angst. Or Jottie's story could have been about her troubles, her struggles, to raise her brother's children while living under his control and dominance. Her love/hate relationship with him. Or Layla's could have been about her new independence, her struggle to be as grown up as she wants to be perceived, her not knowing what she wants, her love life, etc. But because the book was just a taste of all of the above, I didn't really care.

I do think it would make a better movie however. I think seeing flashbacks is almost always better. I think SEEING Vause and Jottie in their youth would have made a big difference in my impression. Movies tend to be more concise as well. A great soundtrack would also help!