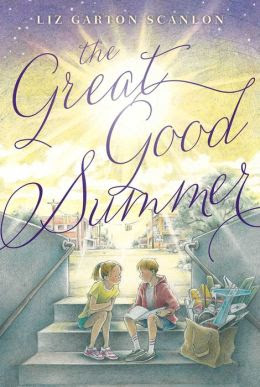 God is alive and well in Loomer, Texas, so I don't know why Mama had to go all the way to The Great Good Bible Church of Panhandle Florida to find him, or to find herself, either.

The Great Good Summer reminded me, in a way, of Because of Winn Dixie. Ivy Green is almost as lovable a heroine as Opal herself. Her narrative voice is certainly strong throughout. Ivy's narration made the novel work well for me.

So Ivy's story, on the surface, is simple: her mom has recently left them (her and her dad) without a word as to where she's going and if she'll ever be back. Ivy and her Dad struggle with their new reality. Some things remain the same: Ivy's babysitting, weekly attendance at church; but some things are VERY different: her mom being gone, her never-subsiding-ache of wanting her mom back, her new friendship with a boy, Paul Dobbs, who most decidedly does NOT believe in God.

One of the book's greatest strengths is in the writing itself:


But the thing is, ideas are my talent. My only talent, really. My voice isn't right for singing, I freeze up in the spelling bee, and I can't shoot a basket to save my life. If I stop coming up with ideas, I'm not gonna have anything left to do or talk about. (5)

Personally, I think if you're an only child, you should automatically be issued a dog when you're born, as a consolation prize, but my mama and daddy disagree. (6)

"Daddy, what are we gonna say when people ask us about Mama?" I stir my bowl of milk. Daddy's right. I'm dawdling. "The truth, baby. They're church folks. Church folks understand other church folks." (23)

Paul isn't a redhead like his mama and sister, and he isn't exactly distinguished-looking either, but he is nice to look at. For a boy that I'm always getting a little mad at, I mean. (44)

I do find it interesting that faith in God is such a big part of this book. Not every character even believes in God. As I mentioned, Paul doesn't. And he challenges Ivy in several scenes, for better or worse. Why do you believe in a God you can't even see? Why do you think there is a God in the first place? How do you know he's real? Why aren't you more skeptical? But there are a handful of characters that do believe in God that do define themselves by their faith in God. And Ivy herself as emotional as she is, as angry as she becomes, does still believe in God.

Does the book get Christianity right? That's hard to say in a way. If your impression of Christianity is that it is a do religion: a do this, this, this, and that religion--a religion defined by things you do and things you don't do--I'm not sure there is enough gospel, enough grace, in The Great Good Summer to change that impression. If you (rightly) hold that Christianity is a done religion: what Christ has done for us, on our behalf, the price he paid to redeem us, to deliver us, then there aren't any passages that scream out heresy either. Though this passage makes me sad:


I hope you can forgive me sometime, Ivy. In the meantime I have to work on forgiving myself. And then it's up to God. That's the really awful thing about this whole mess--I was just trying to get closer to God, which makes it even bigger shame that I messed up as badly as I did." (183)

There were so many things I wanted to say to them both. Like it isn't about trying: trying to be better, or trying to do more. It's about trusting in what God has already done. It's about trusting that Jesus is enough. That God could not love you more than he already does. That he could not love you less either. That he really and truly has paid it all.

I didn't quite love, love, love this one. But it certainly was worth reading.