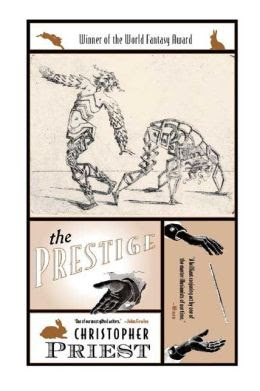 It began on a train, heading north through England, although I was soon to discover that the story had really begun more than a hundred years earlier.

The book is different than the movie. The book has a contemporary framework. Andrew Westley, the narrator, has received a magic book from a stranger, the hint being that it was written by one of his ancestors, an Alfred Borden, a Victorian magician. Andrew was adopted, and he knows nothing at all about his Borden relatives. He's manipulated into meeting a woman, Kate Angier. She has much to tell him, for, she believes him to be Nicholas Borden. The two met when he was three, just before he was adopted. He, of course, remembers nothing. And the idea that there is a historic feud between the Borden and Angier families doesn't really intrigue him all that much. But he stays to hear her out.

The book consists of several stories: Andrew's story, Kate's story, Alfred Borden's autobiography, and Rupert Angier's diary. (Andrew's narration opens and closes the novel.) By the end of the book, a fantastic, strange story has been told.

At its simplest here is the plot: Alfred Borden and Rupert (Robert) Angier are rival magicians ever in competition with one another to be the best, to be recognized as being the best. Both the book and the movie convey this. It is HOW it is conveyed that allows for such big differences between the two.

The movie is more dramatic than the book. It makes the rivalry more intense, more personal, more life-and-death. From start to finish the movie is all about REVENGE and LOSS and doing WHATEVER it takes. The book is quite different. For example, in the movie, Angier blames Borden for the death of his wife who drowned during a performance in a water tank. In the book, however, Angier becomes angry with Borden when Borden disrupts his seance and reveals him to be a fake spiritist. Quite a difference! Especially since the "loss of family" angle is huge in the movie. But in the book, Angier has a family: a wife and three children, I believe. That is the only difference I'll mention in the review since I do want it to remain mostly spoiler free.

The Prestige has plenty of twists and turns in the plot. Especially the movie. But also in some ways the novel. Though if you've seen the movie, then, the book will be essentially spoiled. I think you could say the same if you'd read the book first: the movie would be spoiled.

Which did I prefer? I enjoyed both. I did. I really enjoyed the movie. I thought it was great. I watched it twice in one week. I read the novel in one day. There were sections that were quite compelling. My favorite probably being Alfred Borden's autobiography. And then perhaps Angier's diary. I wasn't as drawn to the contemporary story of Kate and Andrew. Though it does intensify the creepy factor greatly. The Prestige would be PERFECT to read for Carl's R.I.P. challenge in the fall.

Love the cover. Netflix thinks we had the DVD years ago, but maybe my husband watched it without me because I don't remember it!

One of my favorite films. It's not exactly cheery and it's somewhat unclear who the good guy is (probably Cutter, really), but I love how it looks and the performances of the two leads.

I wasn't a huge fan of the book, but I'd like to revisit it, perhaps for a future episode of my podcast, Take Me To Your Reader.

The Prestige is one my favorite films, but I haven't read the book yet. I am now very intrigued!

I was given this book suggestion from an English friend who had read it - back in the 1990s. I enjoyed the book for all its twists and secrets, though at times I found it hard to follow. The movie was interesting as well. Personally I found both entertaining, though I sometimes found it hard to follow the diaries in the book. That of course is explained by the end of the book. To this day I remember the man who could spend as much time with his wife as he did with his mistress, keeping them both happy.