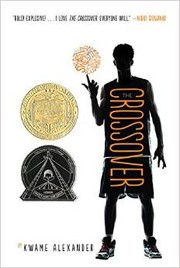 First, I owe this book an apology. I've been purposefully avoiding it, despite it winning a Newbery, simply because it was about basketball. You see, I don't necessarily "like" reading sports books. I wasn't trusting enough, perhaps, that a book could be about basketball and so much more than basketball at the same time.

The Crossover is an award-winning verse novel starring Josh Bell (aka, Filthy McNasty) and his family. Josh and his brother Jordan (aka, JB) both play basketball. Their father, at one time, played professional basketball. But an injury ended all that, and now his focus, his full-time focus, is on his boys, his family. Their mother's almost full-time focus is on the health of her husband who absolutely refuses to go to the doctor. Though, of course, she loves watching her sons play basketball too.

The novel has its ups and downs...especially for Josh. Things are changing, always changing, and he doesn't like it. His brother is distancing himself from the family, from him, and even from the game itself at times, because he's head over heels in love with 'the new girl.' The more besotted his brother becomes, the more disgruntled Josh becomes. And Josh's choices, well, they aren't perfectly good and right. (Whose are?) Still, the two brothers will be tested as never before when their mother's fears prove correct...

I wasn't expecting such an emotional journey. But that's exactly what I got. This one has depth and substance to it. The characterization was very well done. And the narrative verse worked really well.

This is a MG book? I'm a huge basketball fan and am definitely curious about this one. Thanks for the review!

I'm so guilty of that too - avoiding a book because you don't like the main subject matter. But then its so nice when it turns out to be great anyway, and it makes me feel pretty silly! Really good review.

I'm a person who enjoys sports movies (and maybe books?) but dislikes sports in general (and football in particular ;-) ). However, I do like novels-in-verse. You've definitely piqued my curiosity about a book I was formerly very lukewarm about reading.

Thank you SO MUCH For participating in the Newbery Through the Decades Challenge!