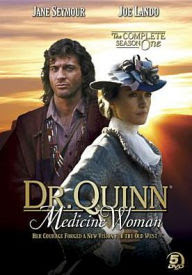 For the Period Drama Challenge I watched Dr. Quinn Medicine Woman, season 1. That's mostly true anyway. I started watching--rewatching the show--a good two weeks before I discovered the challenge existed! If I'd known about the challenge earlier, I would have joined it immediately.

1993 is when Dr. Quinn Medicine Woman premiered. I was in high school. I remember watching it every week, with or without friends around. Some things never change: the swoon-worthiness of Sully. My memory has treated the show quite kindly: forgetting the silly, squirmish, embarrassing, awkward moments of certain episodes. I didn't remember for example how quickly the whole town can become a mob and lose all sanity and reason within seconds. And just how quickly the town-mob can be talked back into reason--usually by Dr. Quinn or another main character speaking sense.

Nor did I remember how EVERYONE drops everything that they're doing to go wait outside Dr. Quinn's clinic whenever she's seeing a patient! This would make sense if it was a handful of people, say the family of the patient, or if it was just when Dr. Quinn was performing surgery. I've also noticed that the inside of the clinic seems to look different depending on the episode. And I noticed in one episode--when she was doing a very personal exam of Dorothy, I believe, though it might have been Myra?--that anyone who would have opened the door would have SEEN a sight. And with the usual crowd probably gathered outside--after all Dr. Quinn has a patient!!!--that could have been a disaster.

What I remember most--and like best upon rewatching--are the characters and the relationships. Namely Dr. Quinn with her three "adopted" children: Matthew, Colleen, and Brian. And, of course, Dr. Quinn with Byron Sully!!!! I like the friendship Dr. Quinn has with Grace, Myra, and Dorothy. And the side-romances of Grace and Robert E, and Horace and Myra.

That being said, I don't "like" all the characters/residents of the town. Some things never change. I remember Hank annoying and disgusting me from the very start. Jake could also be super-annoying, but, he had a handful of redeemable moments.

Epidemic: Almost everyone in town gets sick; Myra nurses Horace; Sully "saves" Dr. Quinn by getting Cloud Dancing to treat her just in time; he also kisses her forehead when she's asleep.
The Visitor: Dr. Quinn's mother comes to visit, and, Brian bonds with her and softens her up a bit!
Father's Day: I believe this is the episode when Sully overcomes his fear of riding horses; plenty of learning-to-ride-a-horse-shirtless scenes.
Happy Birthday: This episode makes me smile and cringe at the same time. The kids decide to do some matchmaking, and they are not subtle. Poor Dr. Quinn! That being said, Sully and Dr. Mike kiss for the first time. And later--many, many episodes later she says that was her best birthday gift. Hank also "tries" to court Dr. Mike in this one.
Heroes: This episode had me cringing the whole time. Colleen has a BIG crush on Sully, and, acts ridiculous. Poor Sully!
The Operation: I'm not sure how believable this episode really is, at, how successful a brain operation could be performed by someone who knows nothing--or very, very little about the brain or neurosurgeon. But convenient or not, this one does have Loren acting human and quite kind actually to Brian.
The Secret: This one has a VERY young Joseph Gordon-Levitt making an appearance. This would have meant nothing to me then, but, within seconds of my rewatch I was like WAIT, IS THAT WHO I THINK IT IS?!?!

I honestly remember so little about this show that I feel I should watch it again, just to refresh my memory. I do know it's not an accurate representation of Colorado Springs, since that's where I live. ;) But that never really bothered me and I do remember adoring Sully, which all these years still seems like a justified emotion! Great recap of the 1st season!

Yes, I noticed that it was/is nothing like Colorado Springs ;) I've vacationed there three or four times, it's one of my favorite places to visit.