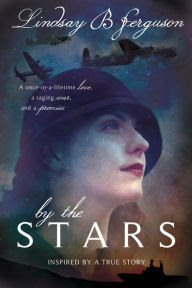 Do you enjoy reading books about World War II? Do you enjoy reading romance novels? Would you find it refreshing to read a book with Mormon characters that isn't about polygamy and sister wives? By the Stars by Lindsay B. Ferguson may be just the book you're looking for. The book is primarily set in Utah, except for the chapters that follow our hero, Cal, to training camp and war. The story has a framework, someone has come to Cal's home to interview him. Subsequently, Cal is telling his story--his and Kate's story humbly and simply. Most of the book, I suppose, is what I'd call a flashback.

Cal and Kate met in junior high school. Their lockers were next to each other. For him, it was love at first sight. For her, well, she wasn't looking for love right then. And while she was friendly enough, she wasn't overly interested in being best-best friends or having him as a boyfriend. But that was then. The book gives readers glimpses of their encounters, meetings. A scene here and there spread out over ten years.

I can see why these glimpses had to be so short and almost disconnected. To keep the story moving. After all, if the narrative were continuous, and the book started when he was in eighth grade, the book would be at least a couple hundred more pages. And it would have a lot more angst more likely. That being said, I had a hard time at first really connecting with the characters. This didn't stay the case by any means. But it was almost like I was waiting for the "real" story to begin.

After Cal returns from his three year mission trip for the church (which we learn little about besides his bus trip there, and his first day there), he reconnects with Kate. But don't imagine for a second, that it will be easy to woo her. For Kate won't easily be persuaded to say "I do" to anyone. She doesn't, she asserts again and again, believe in marriage....

Cal's time in the war was in the last year. Readers get glimpses of the war as well....

Once the romance starts, the story picks up. If you like romance, I think this one will work for you. I have to be in the exact right mood for romance. (I think of Anne Shirley needing just the right kind of pen in order to be able to right mushy love letters to Gilbert Blythe in Anne of Windy Poplars.) I wasn't in that right mood while I was reading this one. But even so, I found it enjoyable enough.

Thank you for taking the time to read and review By the Stars, Becky!

Yes, Yes, Yes!! I have been searching for a read just like this one. WWII usually male driven but occasionally you get a great women lead read. So going to read this soon. I am currently reading Soul of Toledo by Edward Webster, it's a 15th Century based Historical Fiction, a very good read, I was very pleasantly surprised!

Julie, I don't want to discourage you from reading By the Stars, but, you should know it is romance from a male point of view.

One of my favorite WW2 books from a woman's point of view is A Woman's Place by Lynn Austin. And there's a series of WW2 Romances by Sarah Sundin.