My Thoughts on Lark Rise to Candleford, season 1 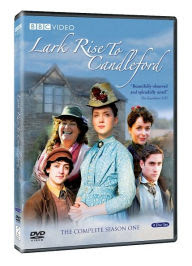 First, I just want to say that I'm rewatching this series. I spent one delightful summer watching all the seasons.

So. The show centers around the post office of Candleford essentially. The heroines are Laura Timmins, a new, oh-so-young apprentice, and the older-and-mostly-wiser postmistress Dorcas Lane. Laura comes from the (rural) community of Lark Rise, and she finds quite a bit of difference between the two communities or villages--between those living (and working) in Lark Rise to those in Candleford.

In Lark Rise, viewers come to know Laura's family especially her parents Robert and Emma, but, also her older brother, Edmund. (She has other siblings, but, at least so far in season one they rarely leave an impression.) Then there is the Arless family. There are a LOT of children. But let's be honest. We really only get to know the mother, Caroline, and the oldest son, Alf. Alf is one of Laura's dearest, dearest friends. And let's not forget Queenie and Twister! One could hardly forget them; they may be the show's most eccentric characters. Another character I can't help loving is Margaret Ellison, the reverend's daughter.

In Candleford, viewers come to know Dorcas Lane, of course, and Zillah, the cook. While Dorcas Lane might have many "one weaknesses," Zillah's literally has one weakness: gossip. She can't help listening in on other people's conversations and then repeating what she hears. Thomas Brown is a lovably eccentric character who works at the post office delivering mail--or telegrams--on occasion. He is easy to tease, I suppose. But I do genuinely like him. And then there are the two sisters Ruby and Pearl Pratt. A LOT could be said about them. Including the fact that at least in season one they have identical outfits for each episode. They can sometimes cause a LOT of trouble. And I'm still not quite happy that they broke up Dorcas' new romance. But. I suppose they're not solely to blame.

The squire. There is a LOT I could say about Sir Timothy Midwinter. Let's start with the fact that he's played by one of my favorite, favorite actors BEN MILES. For better or worse, he is only in the first season of Lark Rise to Candleford. Part of me really LOVED having him on the show. And the other part of me realizes that in terms of story, it is probably for the best that he and his wife did move to London. Sir Timothy and Dorcas Lane were childhood sweethearts, in a way, and they've stayed close after he's married someone else, perhaps a bit too close. I don't believe for one second that anything would happen, that either Dorcas or Timothy would let anything happen. But emotionally, it's not good for either one to spend so much time together. I actually really liked Lady Adelaide Midwinter. And I was so happy that she finally conceived!!!

The first season is ten episodes. I think I really enjoyed--if not LOVED--all the episodes. Perhaps my favorite may be the tenth episode. I really loved Zillah in that last episode. Thomas and Margaret finally, finally admit that they like-like each other. Dorcas' plans to sell the post office come to nothing...thanks to Thomas. Dorcas' new romance occurs in episode eight. I rather liked that episode, and, in a way I wish James Delafield had stayed in Candleford. There was a LOT of drama in episode six, when Polly is abandoned by her family. Lady Midwinter wants to adopt her...and Sir Timothy does not. Dorcas is put into an impossible situation! And oh, that ending with the poem!

Last week, I spent a lot of time watching Dr. Quinn. This week was all Lark Rise to Candleford. There is no comparison really. Dr. Quinn seems like such a "weak" show in comparison to LARK RISE. (Sully is still cute, however.)

Watched this on Amazon Prime before they pulled all of the BBC shows. It was delighful. Have you ever seen House of Eliot? Much later and very different, but still one that I enjoyed!

I remember that Sully was cute. That's about all I remember of Dr. Quinn, though. I'll give Lark Rise a try!

I’ve never even heard of this series,thanks for the education. I’ll seek it out.

Wonderful review. I loved this show! I really liked the village life and the characters.