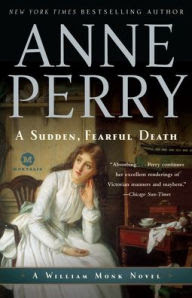 A Sudden, Fearful Death is the fourth book in Anne Perry's William Monk mystery series. I am definitely settling into the series and enjoying it very much! To catch up readers:

William Monk, our detective-hero, has lost his memory. Occasionally, he'll get a flash of something resembling a memory. But for the most part, he's always got one case on the back of his mind: his own. He's piecing together who he was. What he's learned so far is that he was an absolutely horrible jerk that most everyone hated. He does NOT want to be that guy anymore.

Hester Latterly, our heroine, was one of the "Florence Nightingale" nurses during the Crimean war. Her employment since coming home is irregular but somewhat steady. Usually, she's a private nurse. In this book, however, she's going undercover at a hospital...

Oliver Rathbone is a lawyer--a barrister--on "friendly" terms with both William Monk and Hester Latterly. He's even invited Hester to meet his dad, Henry! I've come to greatly appreciate him. He has at various times hired William Monk to do detective work for him.

Lady Callandra Daviot is a saint--nearly. She helps William Monk find work as a private investigator. When he's in-between cases, she makes sure he has enough to see him through. She takes an interest in some of his more interesting cases. She is very good friends with Hester. At times she's helped Hester find suitable employment as well.

These four are our "main characters" that we spend a lot of time with in each book in the series.

The opening of A Sudden, Fearful Death reminded me of some of Wilkie Collins' books--in a good way. I was absolutely hooked though a bit confused since I didn't see how these opening chapters could connect with the book's description on the back cover. The chapters serve as a compelling prologue of sorts--an overture.

The premise: Prudence Barrymore, a nurse at a London hospital, is murdered. Lady Callandra herself discovers the body--in a laundry chute, I believe. Who murdered her? The police, of course, are on the case, but Lady Callandra doesn't fully trust the police to get it right. She hires William Monk to do some investigating for her, and Hester goes undercover as a nurse to see if she can help out on the case. The murderer works at the hospital most likely, and important clues could still be found by close observation. Most of this case focuses on WHY would anyone want to kill her? Several motives are suggested by those involved in the case--prosecution and defense--but, it takes some thinking outside the box to find the right motive and the murderer.

One of the themes in this one is women's rights--or lack thereof. Prudence Barrymore had ONE big dream in life, to be a doctor, but as a woman she faced huge obstacles. Everyone thought they knew what was best for her: give up her idea of doctoring, even of nursing, and MARRY quickly before someone realizes you're thirty-ish. Her family, instead of being proud of her for being so extraordinarily good at what she does, was disappointed and ashamed that she was so unnatural. Very few "understood" her and accepted her as she was.

In addition to reminding me of a Wilkie Collins' novel, this one also reminded me of the show Law and Order SVU. I don't spend a lot of time thinking about how rape and sexual assault would have been viewed in the 1850s. About how the victims would in most cases rather die than go to the police to report the crime, and the thought of pursuing justice in court--NEVER. This book deals with how rape is viewed in society, and, also abortion.

Still really need to give her a try!

I've got the first book on my waiting list at the library. Looking forward to it! Thanks for joining British Isles Friday!