There Was An Old Dragon Who Swallowed a Knight 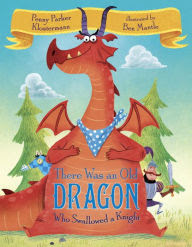 Premise/plot: A rendition of "There Was An Old Lady Who Swallowed A Fly" starring a fire-breathing dragon...

My thoughts: For the record, I just have to say that I loathe "There Was An Old Lady Who Swallowed A Fly." It is not a story or song that I particularly enjoy, and definitely not one that I like to see copied, adapted, parodied endlessly by other writers. But you might notice the five stars I gave it. Why? If I don't "like" the original, and if I usually don't like other renditions?! Because this one is fun, lively, and delightful. Half the book focuses on the 'old dragon' swallowing stuff--a knight, a steed, a squire, a cook, etc--and half the book focuses on the 'old dragon' burping all that stuff back up. Or does he?!

The text works--for me--because the rhythm and rhyme of it work. It is crucial for me to have it; it is that certain something that makes a book decidedly good. A picture book without a proper working of rhythm and rhyme, a natural flow--though not overly forced or it becomes embarrassingly unnatural and awkward--is just sad. A good picture book text should flow naturally enough that any one should be able to read it aloud easily and comfortably. Some books require a good amount of practice and experimentation and energetic effort to get the "reading aloud" just right.

Overall, I'd say this one was quite satisfying.