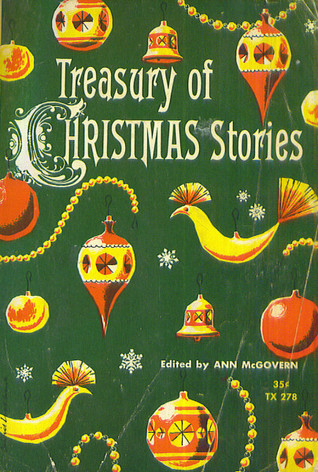 Treasury of Christmas Stories was a delightful discovery for me, a true vintage find. The book was published in 1960, and it features stories and poems mainly published in the 1930's and 1940's. I liked that it was a blend of everything: fiction and nonfiction, stories and poems. I enjoyed the black and white illustrations as well. The illustrator is David Lockhart. Overall, both text and illustrations have a lovely, vintage feeling.

Secret in the Barn by Anne Wood (poem)


It's nearly Christmas--it's Christmas Eve!
And it's snowing all over the place,
The roof of the barn is sugary white--
Its eaves are lined with lace.


Kennet, at the window, thought that the day was not at all like Christmas. The street he looked into was silent, almost desolate; the few people passing walked quickly with bent heads, as if they were cold, or sad--or both.


My goodness, my goodness,
It's Christmas again.
The bells are all ringing.
I do not know when
I've been so excited.
The tree is all fixed,
The candles are lighted,
The pudding is mixed.


The little girl came into her papa's study, as she always did Saturday morning before breakfast, and asked for a story. He tried to beg off that morning, for he was very busy, but she would not let him. So he began: "Well, once there was a little pig--" She put her hand over his mouth and stopped him at the word. She said she had heard little pig stories till she was perfectly sick of them. "Well, what kind of story shall I tell, then?" "About Christmas. It's getting to be the season. It's past Thanksgiving already."

Ashes of the Christmas Tree by Yetza Gillespie (1946) (poem)


When Christmas trees at last are burned
Upon the hearth, they leap and flash
More brilliantly than other wood,
And wear a difference in the ash.


Once upon a time there was a pretty, green little Fir Tree. The sun shone on him; he had plenty of fresh air; and around him grew many large comrades, pines as well as firs. But the little Fir was not satisfied.


I wanted a rifle for Christmas,
I wanted a bat and a ball,
I wanted some skates and a bicycle,
But I didn't want mittens at all.

A Miserable, Merry Christmas by Lincoln Steffens (1931, 1935) (excerpt from an autobiography)


What interested me in our new neighborhood was not the school, nor the room I was to have in the house all to myself, but the stable which was built back of the house.


Hear the sledges with the bells--
Silver bells!
What a world of merriment their melody foretells!

Yuletide Customs in Many Lands by Lou Crandall (1941) (nonfiction)


Christmas in May? It sounds strange, doesn't it? And yet in the early centuries of Christianity, the birthday of Jesus probably was sometimes celebrated in May, sometimes in other months; certainly it was often observed in January. This was because the exact date of the birth of Christ has never been known.


Lord Octopus went to the Christmas Fair;
An hour and a half he was traveling there.
Then he had to climb
For a weary time
To the slimy block
Of a sandstone rock,
And creep, creep away
To the big wide bay
Where a stout old whale
Held his Christmas Sale.


I'll find me a spruce
in the cold white wood
with wide green boughs
and a snowy hood.


There was once a little prince whose mother, the queen, was sick. All summer she lay in bed, and everything was kept quiet in the palace; but when the autumn came she grew better.


Last winter when the snow was deep
And sparkled on the lawn
And there was moonlight everywhere,
I saw a little fawn.


The days were short and cold, the wind whistled sharply, but there was no snow.


We have been helping with the cake
And licking out the pan,
And wrapping up our packages
As neatly as we can.


There was one thing Billy's mother had been wanting, and that was a piano. Mother liked to play, and before her marriage she had played on her sister's piano every evening.

A Visit from St. Nicholas by Clement Clarke Moore (poem)


'Twas the night before Christmas, when all through the house
Not a creature was stirring, not even a mouse;
The stockings were hung by the chimney with care,
In hopes that St. Nicholas soon would be there.

How Santa Claus Found the Poorhouse by Sophie Swett (1956) (story)


Heliogabalus was shoveling snow. The snow was very deep, and the path from the front door to the road was a long one, and the shovel was almost as big as Heliogabalus. But Gobaly--as everybody called him for short--didn't give up easily.


We will sing a new song
That sounds like the old:
Noel.