So instead of hosting another round of World at War, I thought I would still do a bingo card but expand it to a broader focus. Sign up in the comments! 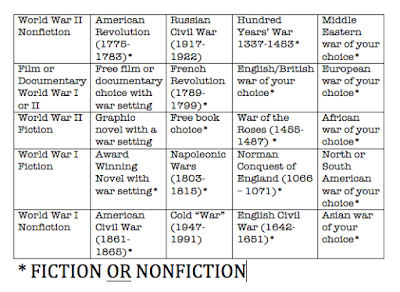 If you choose to accept this mission, your goal would be to read FIVE books and get a bingo.
Unless specifically stated, most squares could be filled by fiction or nonfiction. (I made an exception with World War I and World War II books, giving you two squares for each war). One book per square.

If you don't want to aim for a traditional bingo, read a minimum of five books to fill any five squares on the card, and it will count as a successful win. Or try to see how many squares you can fill in one year! You can replace the _ with an X or a ✔ (copy/paste it) when you finish reading a book. If you list the books you read, that may help other people decide what to read.

Duration: Since I'm posting late, how about a thirteen month challenge. January 2017-January 2018.

Hi Becky, Happy New Year. I have a post about last year's World at War Reading Challenge and this year's War Bingo Challenge, which I have decided to participate in. Thank you for hosting both of these.
This is the link

I'm in for this one, too! I read The Boy in the Striped Pajamas and The Book Thief last year, and now I want to read more war/holocaust books! Thanks for hosting