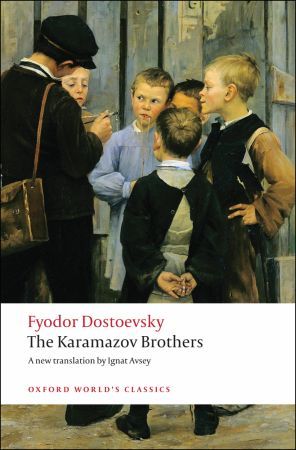 First sentence: Aleksei Fyodorovich Karamazov was the third son of Fyodor Pavlovich Karamazov, a landowner of our district, extremely well known in his time (and to this day still remembered in these parts) on account of his violent and mysterious death exactly thirteen years ago, the circumstances of which I shall relate in due course.

Premise/plot: If you're looking for DRAMA and philosophy, look no further than Dostoevsky's Brothers Karamazov.

If Jerry Springer had had a talk show in the nineteenth century, the Karamazov family would have been his guests. Where to start?!

The father Fyodor has three sons by two different wives. Dmitry (Mitya, Mitry) is his oldest son, but, the two are VERY, VERY estranged. Why, you ask!!! Because both of them are chasing the same woman--Grushenka (Agrafena). She is possibly the town's most notorious 'loose' woman. Dmitry is not really free--in terms of honor--to chase her. He's technically engaged to another woman, Katerina Ivanovna. But for the past month--before the novel opens--he's seen only Grushenka. Ivan (Vanya) has fallen in love with his brother's cast off fiancee. And Katerina doesn't know which role she wants to play in this: the heartbroken victim or the strong survivor who moves on with her life and makes a new start.

On a fateful day, the three brothers, and, the has-no-shame father meet Starets Zosima privately at a monastery. Zosima is a local legend, a local holy man, and Aleksei (Alyosha) reveres him. (Alyosha is a monk at the time, and he remains so until Zosima's death). This family has brought a few tag along friends with them to witness the spectacle. And it is a spectacle. A cover-your-eyes and squirm-a-little spectacle where the father offends everyone but himself. Alyosha is soon torn in a dozen directions by his brothers. He's the perfect mediator it seems, too bad he never seems to find whatever brother he's looking for at the time! Still. He always listens and listens well as each brother confides in him. In fact, it's just not his brothers who confide in him, it seems the whole town knows he's a good listener.

Dmitry is absolutely desperate for money. But is he desperate enough to kill his father, and to steal his father's envelope of money? Yes, he's got a temper. Yes, his temper is made worse when he's been drinking. Yes, he makes dozens--if not hundreds--of "I'm going to kill him one of these days" statements. But is he capable of murder? And is love--or lust--motivation enough to kill a man he hates?

My thoughts: This one is a GREAT read. I loved the writing; I loved the increasing level of suspense. I loved, loved, loved Alyosha. I felt for many of the characters and genuinely wanted to see justice done.


In most cases, people, even evil-doers, are much simpler and more naive than we generally suppose. And the same is true of you and me. (12)

For the realist, faith is not born of miracles, but miracles of faith. (32)

The important thing is not to lie to yourself. He who lies to himself and listens to his own lies reaches a state in which he no longer recognizes the truth either in himself or in others, and so he ceases to respect both himself and others. Having ceased to respect everyone, he stops loving, and then, in the absence of love, in order to occupy and divert himself, he abandons himself to passions and the gratification of coarse pleasures until his vices bring him down to the level of bestiality, and all on account of his being constantly false both to himself and to others. (55)

Only be steadfast in your repentance, and God will forgive you everything. There is no sin, nor can there be any sin in the whole world, that God would not forgive the truly penitent. It is altogether beyond any man to commit a sin so great that it would exhaust God's infinite love. (65)

Man has been created for happiness, and he who is wholly happy has a perfect right to say to himself: I have performed God's will on earth. (69)

The more you practice love, the more you will be convinced of the existence of God and the immortality of your soul. (71)

I love mankind, he said, but I'm surprised at myself; the more I love mankind in general, the less I love men in particular, that is separately, as individuals. (72)

If there is anything, even in our time, that can protect society and reform the criminal, make a new person of him, then it is Christ's law alone, operating through his own conscience. (81)

You will experience much grief, and in grief you will find happiness. Here is my commandment to you: seek happiness in grief. (97)

Man is beset by too many mysteries on this earth. Fathom them as best you can, and survive unscathed. (136)

I think that everyone should, above all else on this earth, love life. (289)

What's amazing is not that God actually exists; what's amazing is that such an idea--the idea of the necessity of God--could enter the head of such a savage and evil creature as man, an idea so holy, so moving, so wise, and which does so much honor to man. (294)

One can love one's neighbor in the abstract and sometimes even at a distance, but close up almost never. (297)

The world rests on absurdity, and without it perhaps nothing would be accomplished. (305)

As soon as I feel I want to understand something I immediately have to renounce facts, whereas I have decided to stay true to facts... (305)

Life will bring you much misfortune, but therein will be your very happiness, you will rejoice in life and convince others to rejoice in it too, which is the most important thing of all. (356)

One can retain precious memories of even the worst families provided one's soul is capable of seeking out what is precious. (363)

What a book--the Holy Scriptures! And with it what miracles and what power have been given to man! It is just like a sculpture of the world, of man and of human nature, and in it everything is named and set out for all eternity. (365)

By interpreting freedom as the propagation and immediate gratification of needs, people distort their own nature, for they engender in themselves a multitude of pointless and foolish desires, habits, and incongruous stratagems. Their lives are motivated only be mutual envy, sensuality, and ostentation. (393)

Young man, do not neglect prayer. Each time you say your prayers, provided you are sincere, there will be a new spark of emotion, and, along with it, a new idea, previously unknown to you, which will raise your spirits anew, and you will understand that prayer is education. (399)

Brothers, be not afraid of human sin, love man even in his state of sin, for this is already a likeness of divine love and is the highest love on this earth. Love all of God's creation, love the whole, and love each grain of sand. Love every leaf, every ray of God's light. Love animals, love plants, love every kind of thing. If you love every kind of thing, then everywhere God's mystery will reveal itself to you. (399-400)

Have you noticed how dogs sniff each other when they meet? Its' some sort of natural law for them. Funny sort of law. There's nothing funny about it, it's just you don't understand it. Nothing in nature's funny, however it may seem to man, with his prejudices. If dogs could reason and criticize, I'm sure they'd find plenty that would seem funny to them, to say the least, in the social relationships between people, their masters--even more than funny, I should say, because I'm firmly convinced that we're by far the more foolish. (662)

I'll suffer for everyone, because, when all's said and done, there has to be someone who'll suffer on behalf of all. (742)

Man cannot live by Hosannas alone, those Hosannas have to be tempered in the crucible of doubt--and all that sort of stuff. (805)

Love cannot be born of nothing, God alone can create something out of nothing. (936)

I tackled this a couple of years ago (my review: https://barbarah.wordpress.com/2014/06/23/book-review-the-brothers-karamazov/). It was a bit intimidating at first, but I enjoyed it and am glad to have read it.