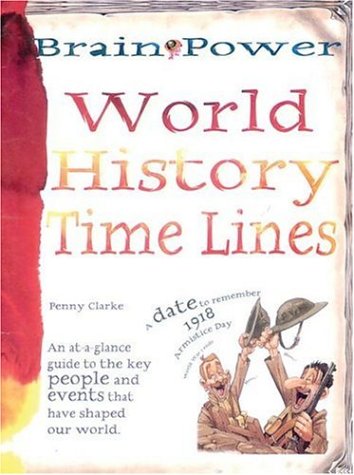 First sentence: Can you imagine living without time? Living without not knowing what day it is or what month or year?

Premise/plot: This is an over-sized, heavily illustrated "picture book" for older readers. Each two-page spread covers a different period of world history. Included with each spread is an introduction, a timeline, and a feature starring famous figures related either to the topic, the time period, or both. For example, Cleopatra is mentioned in the spread on "First Civilizations" which technically covers 6000 to 3000 BC when she didn't live until 48-30 BC.

The topics include: "The First Civilizations," "Chariots and Wars," "Long Live the Pharaoh," "The Birth of Democracy," "Empires Rise and Fall," "The Power of Rome," "Powers in Decline," "The End of an Empire," "Land and Sea Raiders," "Raiders to Rulers," "Wars of Religion," "Warfare and Rights," "Palaces and Plague," "An Age of Exploration," "Nationalism vs. Religion," "Exploring the New Worlds," "Tax and a Tea Party," "Revolution!," "Revolutionary Wars," "Crossing Continents," "Icebergs and Ice Caps," "War--and Peace?," "Peace for Our Time?," "A Second World War," "The Race to the Moon," "Changing Regimes," "The End of Communism," "A Future in Space?".

My thoughts: I liked it okay. It is very at-a-glance. This book was made for skimming. There is not a thing wrong with that. Not every book has to be read cover-to-cover, word-by-word. Reference books are important too. That being said, is this the perfect reference book? Maybe for children--the intended audience. Events get a one-sentence mention. That's it. No details. No context. No explanation. Famous Figures may get a couple sentences instead of just one. But everything is kept basic and on the surface. The book is a fairly good reminder that no one can know--can remember--everything.

I really disliked the illustrations.