Kings & Queens of England and Scotland 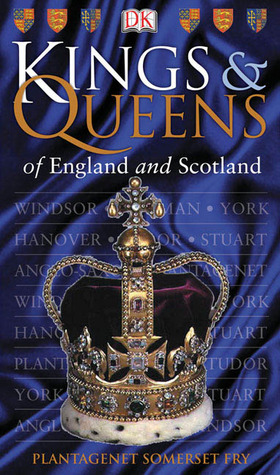 First sentence: The Romans ended direct rule of England in the fifth century, and by the early seventh century the country had split into  seven warring kingdoms.

Premise/plot: A nonfiction reference guide to the kings and queens of England...and Scotland. This one is divided into ten chapters: "The First English Kings," "The Normans," "The Plantagenets," "The House of Lancaster," "The House of York," "The Tudors," "The Kings and Queens of Scotland," "The Stuarts," "The Hanoverians," and "The House of Windsor."

The other chapters cover the kings and queens the enthusiast is probably already familiar with to some degree. Each dynasty is introduced or summarized briefly (in a two-page spread) before introducing the individual monarch. (Here are four 'first sentences.')


The Normans were originally Vikings who settled in northwest France in the early 10th century. Taking control they became Counts, and later Dukes, of Normandy, and they created a powerful state around the mouth of the river Seine. (14)

The surname of this remarkable family [the Plantagenets] derives from the nickname borne by Geoffrey, Count of Anjou, between 1129 and 1251. Geoffrey, the father of Henry II, wore a sprig of flowering broom (Planta genista) as his personal badge. (19)

A branch of the Plantagenet family, the House of Lancaster was a short dynasty of three kings, all named Henry. (32)

The House of York had a stronger claim to the throne than the House of Lancaster, although both were branches of the House of Plantagenet. (38)

There will be some readers anxious about what he says about Richard III. After all, a measure of a book--for some--is what they have to say about one king.


Richard III was king for barely two years, but once he was dead, historians, clerics, and even playwrights fell over themselves to blacken his name. Most of the propaganda was designed to serve the Tudor dynasty, which began when Henry VII's army defeated and killed Richard at the Battle of Bosworth in 1485. However, in more recent times, historians have questioned whether Richard III really deserves his evil reputation. (42)

My thoughts: I really enjoyed this one. It is concise. It is readable. It is filled with charts and illustrations and oh-the-bullet-points. It's just packed cover-to-cover with details. Now, that being said, this one is an overview. Whole books--long books--have been written about individual monarchs. This will be just a starting place for the real enthusiast, or perhaps a refresher course.

Some might call this a reference book, a guidebook. I see it as an absorbing cover-to-cover read, as compelling perhaps as a bestselling thriller or mystery.

A few years ago, I was completely obsessed with the British children's program, Horrible Histories. This book reminded me of the joys and thrills of watching the show.

I memorized the English Queens and Kings from the Stuarts forward for our trip to England and it was really helpful to put things in historical context. This book might help me go back a bit further and learn some Scottish history, too.