The Day They Came To Arrest The Book 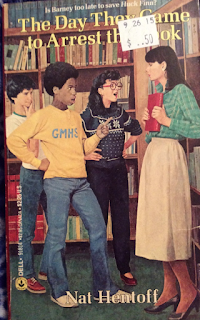 First sentence: "He's going to be right inside the door," Luke said to Barney as they neared the entrance to George Mason High School. "He's going to be standing there with that big phony smile and that chocolate voice."

Premise/plot: When a history teacher assigns The Adventures of Huckleberry Finn to her class to read, the book is challenged by angry parents. Will the book "be arrested" and removed from the reading list AND the school library? Or will the book remain available to students freely and without restrictions? Whose side is the principal on?

My thoughts: The Day They Came To Arrest The Book is a thousand and one times better than The Property of the Rebel Librarian. Primarily because it is more believable--both characters and situations. It is also more thought-provoking.

I appreciated the diverse opinions expressed in The Day They Came to Arrest The Book. The opinions cover a wide spectrum of thought. Perhaps with the exception of the unprincipled principal there are no villains, no bad guys. There are differences of opinion, yes, but no "good" guys and no "bad" guys. Not all opinions are informed opinions. But many are. That is, many people with strong opinions who are speaking up--on both sides--have actually read the book in question in its entirety. A few people have strong opinions and loud voices but haven't actually read the book--just bits and pieces. I think it's important to see that two good people can have differences of opinion.

What makes the principal so unprincipled? He's a sneaky guy. He does not want to fill out forms and paperwork. He doesn't want to go through the proper channels when it comes to book challenges. He'd rather pressure the teacher or the librarian into voluntarily removing the book with no fuss and no publicity. Because of his powerful position, because they fear losing their job, many go along with his "suggestions" that aren't really suggestions. But not this history teacher and not this librarian. The guidelines are in place and they will be followed...this time at least.

The book offers much food for thought--not only about banned books and censorship but also intellectual freedom in general. One of the arguments in the book is that it should be up to educators to choose wisely what to make available to their students. What to teach in their classrooms. What to have available in their libraries. Just because a book is published doesn't mean that it belongs in a school. The opposition claims that this 'choosing wisely' is a form of censorship. That to 'choose wisely' is limiting the student body's freedom to choose.

Personally, I think it makes the most sense. So long as school budgets are limited, it just makes the most sense to spend wisely and thoughtfully. I'll clarify that a tiny bit. Audience is key. Knowing your specific audience. A school librarian should have some idea on what students need, what students want, what teachers need, what teachers want. They should know which authors are popular and stay in circulation. They should know which genres circulate best. They should also read widely themselves. Quality should matter. That is what I mean by spending wisely. Making the most of each dollar. I don't mean that librarians should only buy books that they personally love, love, love and are custom-fit to their tastes and preferences.

One of the examples in the book is the hypothetical question: should a school library buy books written from the perspective that the holocaust never happened? Or should a library keep such 'trash' out of the library. Yes, such books exist--and others like them. But should a school library spend money on books like that because students should have the freedom to decide for themselves what is true and what is a lie?

I would classify this one as a YA book. Readers should know that it does use the n-word a lot in the context of discussing The Adventures of Huckleberry Finn. There are many times when Twain's novel is quoted. The novel also contains blasphemy--taking the Lord's name in vain. In terms of profanity it reminds me of Fahrenheit 451. The book is well worth reading in my opinion.


Show me a book that offends no one, and I will show you a book that no one, in the whole history of the world, has ever willingly read. (34)

You know, it's never the book that's really on trial. It's the author, even if he's dead. Remember that, Barney. Every time this sort of thing happens, it's a person who's being tried. For his ideas, his feelings, his memories, his fantasies, his yearnings, his language, which is his very self. To tell you the truth, I don't care what the book is. I hate to see words on trial. (83)

Once you give people, any group of people, the power to censor books, you're opening up quite a can of worms. And sooner or later, they can turn on you. (107)