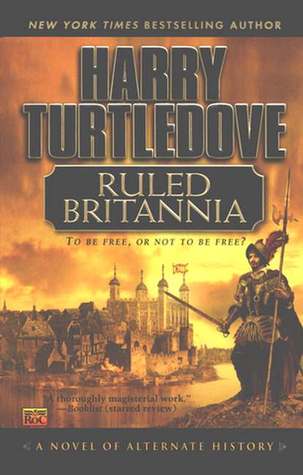 First sentence: Two Spanish soldiers swaggered up Tower Street toward William Shakespeare. Their boots squelched in the mud. One wore a rusty corselet with his high-crowned morion, the other a similar helmet with a jacket of quilted cotton. Rapiers swung at their hips.

Premise/plot: What if the English navy had not defeated the Spanish Armada in 1588? What if instead of Queen Elizabeth reigning in the year 1597 she was instead locked away in the Tower? Turtledove gives us alternate history in his novel Ruled Britannia. It is told primarily from two perspectives: William Shakespeare and Lope de Vega.

Shakespeare has a choice to make. Should he commit treason against Spain and write a play that could potentially help overthrow Spain's rule and restore Elizabeth to the throne? Or should he play it safe and write a play memorializing King Philip II of Spain? Perhaps he'll be crafty and do both....but which one will get performed upon the King's death?!

Lope de Vega is in awe of William Shakespeare. He can nearly always be found watching his plays, watching the actors on and off stage, hanging around and conversing. He's a soldier on a mission: be on the lookout for any treason, any subversive meanings in the plays he watches. Some higher ups are suspicious of Shakespeare--but not de Vega, not really. Shakespeare doesn't care who rules so long as he can write, right?!

My thoughts: I imagine that Ruled Brittania was an absolute joy to write. Turtledove claims--and I have no reason to doubt--that he repurposed many, many lines from actual Shakespeare plays into "new" Shakespeare plays in this alternate history. In addition to Shakespeare, he used other contemporary playwrights from the time to craft his new plays and dramas. He obviously felt it was important to bring Shakespeare to life--and so he relied on Shakespeare's own words to flesh out his character and his dialogue. Like William Shakespeare, Lope de Vega is a real historical figure--a Spanish playwright from this time period who--at least according to the author's note--sailed on the Spanish Armada and returned to Spain to have a successful career.

Did I enjoy reading it as much as Turtledove enjoyed writing it? Probably not. In fact, I found it MUCH too long--tedious even. I was interested in the bare bones of this one. I wanted to know WHAT happened overall--would Shakespeare's play about Boudica (alternate spellings Boudicca, Boadicea, Boudicea) rebelling against the Roman Empire happen? Would it be successful? Would Elizabeth reign once more?

There were dozens of characters that peopled this novel that I just did not care about at all--not even slightly. I imagine that some--perhaps many--were actual historical figures. I just didn't care. Perhaps if the author's note was placed FIRST, I might have tried to care harder. Perhaps if there was a list of characters--noting which were historical and which were fictional. Perhaps if there were footnotes indicating which lines came from which actual Shakespeare plays or noting the other sources used?

One thing I know without a doubt...the chapters were unreasonably LONG...insufferably long. "Short" chapters were around thirty-five pages long. WHY TORTURE READERS?! You take a perfectly good premise--an entertaining one--and practically do everything possible to drain all the enjoyment of actually reading it?!