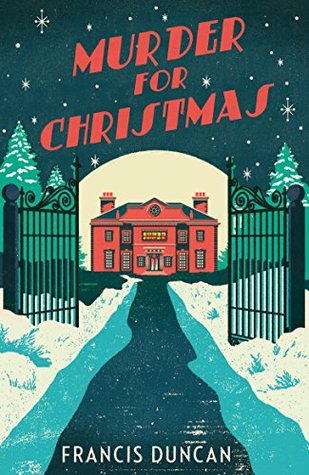 First sentence from the prologue: No one could have foretold how it was going to end. Not even the murderer. It is not to say that the crime was hastily conceived and clumsily executed.

Premise/plot: The book opens on Christmas Eve. Father Christmas, or I should say, a man dressed as Father Christmas is murdered at the foot of the Christmas Tree. The setting is a country house party. One of the guests is a murderer...and one guest happens to be an amateur detective. Coincidence?! Perhaps.

I thought the writing was well done. It has a literary feel to it almost. But literary or not--it is definitely suspenseful!


The landscape was a Christmas card in three dimensions. There would have been no incongruity if a sleigh drawn by reindeer had come sweeping over the brow of the downs. It did not, in fact, seem fantastic that the red-robed figure of Father Christmas was outlined in the moonlight, moving quickly along the terrace of the big house. It was, after all, Christmas Eve, when such things—particularly in such a setting—were to be expected. But if one watched carefully, it was sometimes possible, especially when the moon was obscured, to see a faint glow behind the windows of the ground floor. It was a glow that changed its position, as though it owed its origin to a flashlight carried by someone who moved stealthily within the house. And outside in the snow and the shadows there were muffled, hidden figures. Concealed from the house and from each other, they watched intently—and waited upon opportunity. The atmosphere was brooding, tense with foreboding. Fantasy and mystery, violence and death were abroad. It seemed that time was moving reluctantly and with an ever more tightly coiled dread toward some terrible climax. And at last the climax came. It came when the bell had stopped. It came when the moonlight, searching again through the clouds, swept softly across the white lawns, revealing the ragged line of footprints. It came when the cold light flooded up to the half-open french doors and, tracing the moisture on the polished floor, came to rest upon the red thing of horror that was Father Christmas, stark and sprawled upon its face in front of the despoiled Christmas tree. It came with a woman’s scream—desperate, high-pitched, and raw with terror.

I enjoyed the characterization. In mysteries of this sort, it is important that readers really get to know all the suspects and the detective. No complaints here! Duncan did a fantastic job!!!

I almost want to reread this one now that I know who did it to see it again through new eyes.

This sounds fantastic! I will have to look for it. Thanks for the review!