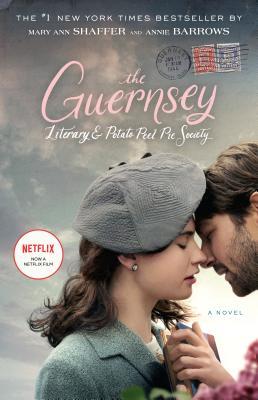 First sentence: Dear Sidney, Susan Scott is a wonder. We sold over forty copies of the book, which was very pleasant, but much more thrilling from my standpoint was the food.

Premise/plot: The Guernsey Literary and Potato Peel Pie Society is an epistolary novel. I would say it consists almost entirely of letters centering around a young author, Julia Ashton, as she sets out on her next project. The book opens with her on tour for her last writing project--written under a pseudonym--concerning the war. She is seeking inspiration for her new project. And this inspiration comes from an unlikely source, perhaps, a letter she receives in the mail from a stranger concerning Charles Lamb.

When Dawsey Adams writes Julia Ashton he little expects what unfolds. He's seeking other books by Charles Lamb--does she know a London bookseller?--and a biography of Charles Lamb. He's writing to her--a stranger--because her name and address was in the second hand book he picked up--a selection of Lamb's works. He mentions oh-so-briefly a roast pig, a literary society, and how much reading helped during the war.

His letter left her wanting more, more, more! Surely there is a good story worth investigating. So begins a friendship carried out through letters. She writes not only Mr. Dawsey Adams but the other members--men and women, young and old--who were a part of the literary society during the occupation during the second world war.

(She asks for their input into an upcoming article--they consent.) After providing character references, they willingly share and share and share and share. It becomes obvious to one and all that Julia Ashton belongs. So she goes to visit all her friends to meet them face to face for the first time. She'll be staying in Elizabeth's little cottage...

One of her closest new friends is a little girl, Kit, a war orphan--Elizabeth's daughter fathered by a German soldier. Juliet loves Kit. Kit loves Juliet. Juliet begins daydreaming of adopting Kit as her very own daughter.

I mention all this because the movie gets 80% of the details completely and totally wrong in telling the story.

My thoughts: I love the book. I crazy love the book. I think this is the third time I've read it. But it's been years and years--six years to be precise, it was 2014--since I read it. When I watched the movie it was such a distant memory that all the differences didn't jump out at me. Watching the movie wasn't a nails on the chalkboard experience for me because I wasn't aware that practically everything was different from the book.

I started this book last week and watched the movie on Saturday night. All I could see were the big, big differences between the two. The movie really goes out of its way to provide tension and drama.

In the movie, Juliet goes to the island uninvited and unannounced. She's never corresponded with any of the other members.

In the movie, Juliet is met with skepticism and kept at a distant. No one really wants to talk about Elizabeth, about the war, about the society, about anything. They don't trust her.

In the movie, Juliet stays at a hotel or inn. She is not renting Elizabeth's cottage.

In the movie, Juliet is ENGAGED to a man she's been dating about six months. In the book, she's been seeing him about TWO months. When he proposes--over dinner--she says NO, it's way, way, way too soon. I couldn't possibly say yes without giving it a lot of thought. The more she thinks about it, the more she's leaning towards NO WAY. In the book, he shows his jerky-jerk-jerk ways very early on. Warning flags are being waved all about, Juliet notices them all and says NO.

In the movie, Juliet leaves the island...only to return to tell Dawsey she loves him. In the book, she never leaves. Never. She writes on the island. And she writes with full permission from all concerned. There is nothing secret or underhand about her being on the island.

In the movie, very few characters are really explored. In the book, there are dozens of people on the island whom we hear from--through letters mostly.

In the movie, Elizabeth's death is handled in a very tacked on way. In the book, they receive a letter. Dawsey and maybe another person go to Europe to talk to the Jewish woman who was Elizabeth's friend...and who witnessed Elizabeth's death. They bring her back to the island. She is very much a part of the action.

In the book, there's a super-sweet relationship between Juliet and Isola. One of my favorite scenes is when Isola is chastising Juliet for not telling her about Jane Austen sooner! How could you let me think that Heathcliff is the ideal when all along there is Mr. Darcy?!?!?! Isola's grandmother's letters is also one of the highlights of the book.

There is so much depth and substance, heart and soul in the book. The movie is so....lacking in that department. It chose to add some drama--tension between Amelia and Juliet, for example. The Juliet from the book would have never gone uninvited and pushed and pursued a story without full permission.

Perhaps there is some secret sort of homing instinct in books that brings them to their perfect readers. How delightful if that were true.

I love seeing the bookshops and meeting the booksellers-- booksellers really are a special breed. No one in their right mind would take up clerking in a bookstore for the salary, and no one in his right mind would want to own one-- the margin of profit is too small. So, it has to be a love of readers and reading that makes them do it-- along with first dibs on the new books.

Isola doesn't approve of small talk and believes in breaking the ice by stomping on it.


It was amazing to me then, and still is, that so many people who wander into bookshops don't really know what they're after--they only want to look around and hope to see a book that will strike their fancy. And then, being bright enough not to trust the publisher's blurb, they will ask the book clerk the three questions: (1) What is it about? (2) Have you read it? (3) Was it any good?

Will Thisbee gave me The Beginner's Cook-Book for Girl Guides. It was just the thing; the writer assumes you know nothing about cookery and writes useful hints - "When adding eggs, break the shells first.”

“What on earth did you say to Isola? She stopped in on her way to pick up Pride and Prejudice and to berate me for never telling her about Elizabeth Bennet and Mr. Darcy. Why hadn't she known there were better love stories around? Stories not riddled with ill-adjusted men, anguish, death and graveyards!”

The first rule of snooping is to come at it sideways--when you began writing me dizzy letters about Alexander, I didn't ask if you were in love with him, I asked what his favorite animal was. And your answer told me everything I needed to know about him--how many men would admit that they loved ducks?

I adored this book too, and the different personalities of all those readers, not to mention the way this WW2 occupation lifestyle comes to life. I haven't watched the movie yet, because I was nervous that it would deviate from the story. That's one of my biggest gripes, especially with a great book. You've confirmed that this is exactly what happens! If I ever do watch it, I'll go in forewarned.