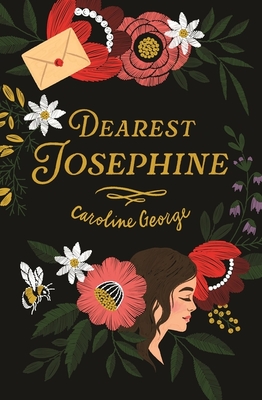 First sentence: Hi Faith, I did a thing. A big thing. And I’m not sure how to tell you without sounding like the rotten human being who abandoned her best friend for a boy.

Premise/plot: There is a framework to Dearest Josephine that I'm guessing readers will either love or hate. Josie De Clare, our heroine, is mourning the loss of her father and has gone to an estate her father (secretly) owned near the Scottish border. While there she discovers a stash of letters addressed to JOSEPHINE DE CLARE and an unfinished manuscript of a novel. The writer is Elias Roch. The letters are dated 1820. (She also has a portrait of Elias in the house).

There are three concurrent plots for readers: 1) present day Josie De Clare emailing and texting her friends and family (her best friend, Faith, her new friend, Oliver, and her Mum; 2) Regency era, sulky Elias Roch writing letters to a mystery woman named Josephine De Clare that he met just once at a masquerade; 3) Elias Roch's FICTIONAL manuscript in which he fantasizes that he finds Josephine De Clare again--though there's a catch, she's engaged to his cousin. (This fictional novel changes some names--though not Josephine's name.)

As the present day Josie reads Elias' words, she falls madly, deeply, passionately in love--very very INSTA LOVE--with a man she can never have. The more she falls for HIM the less in touch with reality she becomes. Will Faith and Oliver--her present day friends--keep her grounded in the present and hopeful for the future? Or is she destined to be just as sulky as Elias?

My thoughts: I have many, many, many thoughts on this one. I do. I'll start with the positive. My favorite character is OLIVER. If there is redemption to be found in this one--redeeming it from being a I-regret-wasting-my-time-novel--it's in Oliver's personality and character. (I also like his grandparents. Though we don't get enough of them to really qualify as being minor-minor characters.)

The novel is told almost exclusively through letters, texts, and emails. We do get replies back. Faith's texts and emails to Josie. Oliver's texts to Josie. I guess I'm neutral about this narrative choice. I will say that the narrative voice(s) are a bit weak.

The love triangle is persistent yet weak. Readers can't really escape the fact that Josie is falling for TWO boys. Elias lived during the Regency period--I'm guessing he was born circa 1800 give or take a year or two. Oliver is her present day flirty-bantery-boy-next-door.

Everything is DRAWN OUT a bit unrealistically. I think in real life if one discovered a bundle of letters, one wouldn't space reading each one out so much. It seems that days--if not weeks--go by in between her reading of each letter AND individual chapters in the manuscript. This is a narrative technique so that Josie's story unfolds simultaneously to the letters and novel. But at the same time while it might be necessary as a plot device, it's a bit unrealistic. If you could sit down with a stack of letters--even if there were twenty or thirty plus--and a couple of cups of tea--over a weekend, then it would only make sense that you do so. The novel sections in particular seem drawn out. Josie must be the slowest reader ever.

Elias reads like he's the fantasy dream boy of a book-loving eleven or twelve year old. Josie is a college student.

The premise--if carried out--is intriguing. IF the present-day Josie de Clare is actually actually the mystery woman from Elias's past--if they are one in the same--then that might be intriguing enough if carried out well. Perhaps she hasn't met him yet--but she will--somehow, someway travel back in time and meet him. But nope. That's not this story, this novel.

Readers can choose whether or not to believe they are one in the same or not...but there's nothing decisive in the story besides Josie's stubborn persistence that HER ONE TRUE LOVE, HER ONLY SOLE MATE, THE ONE SHE WAS DESTINED TO SPEND ETERNITY WITH FOREVER AND EVER AND EVER BLISSFULLY HAPPY was born two centuries ago.

The present day narrative is believable enough I suppose. I suppose that a young college age girl could write, talk, and act like Josie. Could.

The past narrative is a bit less believable. Elias' writing doesn't really feel time-appropriate? I mean the phrasing is a bit stilted. It's like he's writing in a modern-day voice with a few old-fashioned phrases tucked here and there. But it's almost like Elias is a bit fish out of water in his own time. For example, I couldn't figure out why/how it was that Lorelai, a young woman, could live unchaperoned with Elias for weeks/months so matter of factly. Young women--even if on the best most friendliest of terms--didn't just go and spend weeks/months with a SINGLE man with no chaperones of her own or his own. It's the two of them in this estate/house plus a couple of servants. True, he's mainly so obsessed with sulking that he doesn't have lusty-lusty thoughts about taking advantage of her. But still. It just wasn't appropriate.

The novel-within-the-novel reads like bad fan fiction. In my opinion.