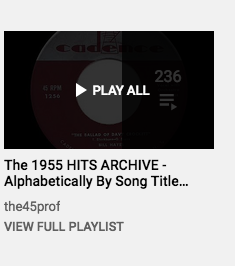 So. I recently listened--with only a fractional number of skips--to the 1955 Hits Archive uploaded on the45prof YouTube channel. This is his description of the playlist, "This is a playlist of commercial recordings and songs that proved popular during the calendar year 1955 (some were recorded in 1954) via sales, juke box play, and radio exposure.…plus some others that have gained increased recognition or have been shown to have had an impact during the decades that followed." There are 236 songs in all. I do not think it covers *every* song recorded and released in 1955. (It includes all of the songs that hit #1 on the Billboard for 1955 except for Mr. Sandman which released in 1954 and was still #1 on the chart in January 1955.)

I listened with my mom. She wasn't around for every single song--but then again I took a few breaks as well. We had a running commentary going--I wish I could have captured everything we said--though I wouldn't necessarily share it all! She is a hoot!

One thing stands out--well, many things stand out--is that a song could/would have MANY different artists performing the exact same song within the given year. For example, this list includes FOUR different versions of the Ballad of Davy Crockett. It was always fun for us to try to guess if the song we were currently listening to would be there just once--or if they'd be many, many, many versions. (Another song with four versions was Unchained Melody. Probably half a dozen had three recordings. It wasn't out of the ordinary for there to be two--but most appear just once.)

A few songs we decided would probably be canceled in today's society. (And we weren't advocating for them. One was Ling Ting Tong by the Five Keys and the other was Pancho Lopez by Lalo Guerrero).

Most of the songs have a same-same-same feel. Though not all. Swing and big band influences improved the lot, in my opinion. There were a dozen or so songs that were rockabilly and offered a "new sound." Mom got excited when we got to the "R's" and there were several Bill Haley songs in a row. Definitely a lot of slow ballads--some sultry, some lullaby-ish. There were some mambo inspired and cha-cha as well.

I would say the prevalent theme was 90% love songs, 9% heartache/heartbreak songs, and 1% novelty.

Oh, another thing--so many songs came from movies and musical shows--I'm guessing Broadway influence was strong this year.

The list does not have much country and western representation. I would be curious to see what 1955 country songs were out. Wikipedia answers that question... but I'll have to search YouTube to see if there's a playlist or channel to satisfy my curiosity. Mom did say that Grandma would have been listening to country instead of pop most likely.

So in no particular order, these are my HIGHLIGHTS

Where Will the Dimple Be by Rosemary Clooney. This song was pure DELIGHT. How have I never heard this song??????

Seventeen by Fontane Sisters. There were three versions to choose from. I listened to this one and thought it would pair well with Abba's Dancing Queen.

The Popcorn Song ("Too Pooped To Pop") by Cliffie Stone. This is a novelty song that was a HOOT. I really enjoyed it!

Pledging My Love by Johnny Ace. There were two versions of this one. I found it super-super-super sweet. And I could almost imagine this being a couple's song and growing with them through the decades.

Playmates. Fontane Sisters. This song isn't original to 1955--it's a much older song--but I am including it because I remember my mom singing it because her mom sang it. So it was like encountering an old friend.

Not as A Stranger. Frank Sinatra. I love, love, love, love, love Sinatra. I do. I'd not heard this one. Sinatra is on the list several times. Would pair well with his better known Strangers In the Night. Fairy Tale is another lovely lovely song that was completely new-to-me.

It's A Sin To Tell A Lie. Somethin' Smith & The Redheads. This one I'd personally classify as a novelty song. The middle verse has a twist!!! Mom missed it the first time; she didn't believe me or understand why I started laughing so hard. We had to listen to this one twice.

Cherry Pink and Apple Blossom White by Perez Prado. Instrumental. I loved this one so so so so much. There's also a version with words.

Bo Diddley -- Bo Diddley. This one was refreshingly different from the same-same-same feel of most of the songs. It also sounds like a hand jive song.

Black Denim Trousers by The Cheers. I include this NOT because I actually liked it--I didn't. But because as soon as I heard it was about a motorcycle rider I predicted he will BE DEAD BY THE END OF THE SONG. I was right.

I Want You To Be My Baby by Georgia Gibbs (one of two versions.) This is a swingin' song. How did they ever learn to know when to breathe while singing the fast verses???? Incredible! Sounds so effortless!

Earth Angel because it's Earth Angel. I chose the Penguins version. (Not the Crew-Cuts version

45prof writes, "Have you heard this classic piece of doo-wop sound exactly like this before? As was the case with the also-posted single version of “The Wallflower” (aka “Dance With Me Henry”) by Etta James, the Penguins’ “Earth Angel” has rarely, if ever, been reissued on LP or CD in its actual original ‘hit version’ form. In fact, many of the various post-1955 45rpm reissues also contained the same dry, unsweetened, and unedited non-single-version track that we’ve been accustomed to hearing for the past 50+ years. With its touch of added reverb, here is the original-issue 45 & 78 single track, but the ‘bad news: label boss Dootsie Williams wanted to get right into the vocal, so he lopped off the first 5 seconds of that now-familiar piano intro! Cleve Duncan and The Penguins spent three weeks atop the rhythm ‘n blues sales chart with “Earth Angel” and also accomplished the still-rare feat of bringing an R&B hit into Billboard’s ‘pop’ top-10 best-sellers, where it peaked at #8. Of the various cover versions released into the marketplace, the Crew-Cuts rendition was the most successful. Thanks to Matt The Cat for the loan of his original Dootone 78 used in this post."

Only You by The Platters. (I chose this version over the Hilltoppers version) I absolutely love, love, love, crazy love and adore doo-wop!!!!

I really enjoyed Rock-a-Beatin' Boogie by Bill Haley and His Comets. I think I like it even more than Rock Around the Clock.