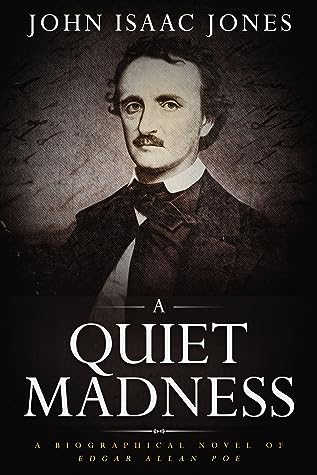 First sentence: In the city by the River Charles, the winter of 1808 proved to be one of the most brutal in its history. While October and November had been relatively mild, two savage nor’easters had blown through in late December and dumped more than nine feet of snow on hapless residents in less than a week.

Premise/plot: A Quiet Madness is a biographical novel (aka fictionalized) of Edgar Allen Poe. It opens with his birth--in a funeral parlor--and ends soon after his death. It is always dramatic, sometimes melodramatic, never ever boring. At its best, it shows Poe as he is inspired and in the act of writing his poems and short stories. For example, readers "witness" Poe's very act of creating The Raven, perhaps his best known poem. At its worst, it is a bit graphic in depicting Poe's sex life.

My thoughts: It was a quick read for actually being close to four hundred pages. Perhaps this is due to all the melodrama and drama. It keeps you turning pages--even if it's more like watching a train accident. (The train accident not being necessarily the author's writing style, technique, or craft--but the events unfolding in Poe's life.) That being said, I think the dialogue was probably the weakest aspect of this one. There were times the dialogue just got to be so off-putting because it was unnatural. It didn't feel appropriate to his times...or appropriate to our times. Still, there were moments of great interest. So I don't regret spending time with this one.

One thing I didn't realize before reading this one was his marriage to his TWELVE YEAR OLD first cousin. It's unimaginable to me to think that twelve is young enough and mature enough--physically, mentally, emotionally, psychologically for marriage. And the narrative does its best--in my opinion--to make this as normal and ordinary as possible.  Another instance is when a fifteen year old Poe is seduced (he is quite quite willing) by his best friend's mother--an adult.