118. Children of the New Forest 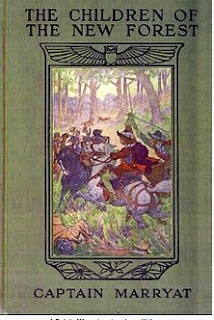 First sentence: The circumstances which I am about to relate to my juvenile readers took place in the year 1647. By referring to the history of England, of that date, they will find that King Charles the First, against whom the Commons of England had rebelled, after a civil war of nearly five years, had been defeated, and was confined as a prisoner at Hampton Court.

Premise/plot: Jacob Armitage, a forester, saves the lives of the four Beverley children--Edward, Humphrey, Alice, and Edith--during the English Civil War. He overhears a plot to burn Arnwood--the Beverley estate--and rushes to get the children to safety before the soldiers can arrive. He decides it would be safest to allow people to believe the children died in the fire. As for the children, he'll raise them as his grandchildren in his oh-so-humble cottage hidden deep within the New Forest. He'll teach the children everything they will need to know to survive on their own.

Most of the action occurs after Jacob's death as the children are a bit older. (The first part reads a bit like Swiss Family Robinson or Robinson Crusoe.) Edward has become a great hunter--though hunting technically isn't allowed in the New Forest. The Parliament--led by Cromwell--has taken possession. Edward doesn't recognize that government--his family long being loyal to Charles I and then his son, Charles II. But he slowly but surely comes to respect the man left in charge--a Mr. Heatherstone. He has a daughter, an oh-so-beautiful daughter, named Patience. After much reservation--years go by since their first meeting--Edward becomes his secretary and takes up residence with the family. But when there's an opportunity to serve the should-be-would-be King (Charles II) will Edward do his duty and continue his family's legacy?

My thoughts: I really enjoyed Marryat's The Children of the New Forest. The first half focuses more on life in the forest--living off the land, hunting, tracking, trapping, building things, catching wild cattle, making. The second half focuses more on relationships and the times. There's a bit of romance in this last part.

I loved the faith aspect throughout the book. Jacob raised these four kids to love God and to trust in Him always.

I read this one fairly recently too, having loving it as a teenager. The title doesn't indicate what an exciting, fairly fast-paced plot it has. I remember loving Edward's heroics as a teen, but this time round, Humphrey's cleverness and ingenuity impressed me too. They would have died without him probably more than Edward! I have heard some people say that this should be called 'Boys of the New Forest' and I sort of see their point :) Very enjoyable.