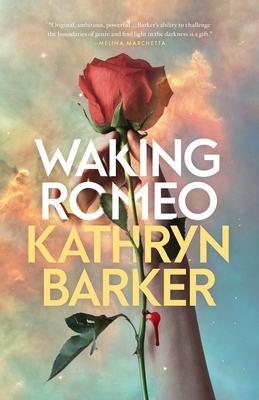 First sentence: I'm sitting in the chapel for school assembly when Headmistress Cisco says, "And now we'll hear a special tribute from Rosaline."

It has been said a million times (or more) that two wrongs don't make a right. (But what if they did????) If you've been a long-term follower of my reviews, you already know that I am NOT a fan of William Shakespeare's Romeo and Juliet OR Emily Bronte's Wuthering Heights.

Kathryn Barker's imaginative new novel Waking Romeo plays with a handful of characters from these two classics. Specifically, readers meet JULES, a troubled teen whose life has not been the same since her attempted suicide and Romeo's "death" and ELLIS one of a handful of time travelers that can go *backwards* and *forwards* in time.

Ellis (and his 'Deadender' "family") live at the end of time in an abandoned bus. They go on missions throughout time in a grand seemingly-impossible attempt to save the world (from itself). Their missions all seem to center in and around this idea of...you guessed it...WAKING ROMEO. But Romeo has been in a coma--I guess coma is the right word--for years.

Jules, as I mentioned, is a mess. One of her outlets is writing a play in the style of William Shakespeare. She is writing her and Romeo's story. Only she knows deep down that what is on the page is far, far, far from the truth. Still, if it was not 'true love' if it was just two kids being idiots, how can she make what happen mean something? How can she come to terms with her rock bottom if it was all for nothing???

Ellis (and friends) meet Jules in her time--2083--and thus begin their adventures and misadventures in waking Romeo...

I definitely like Waking Romeo a thousand times better than Wuthering Heights and Romeo and Juliet.

The world-building is slushy. I'll try to explain. Some things are clear and straight-forward. Someone created time-travel pods--maybe in the 2050s???---and it became trendy to travel. But there's a catch, travelers can only go *forward* in time. Traveling thus disrupts families, generations, society, and culture. If everyone keeps leaping ahead, there is no one left behind to do the work--the maintenance needed to take care of the world, of society. Travelers may not like what they see so they keep jumping and jumping and jumping ahead. Those who can afford the pods to travel, well, they just think I'll keep jumping until I find paradise...but such does not exist. Thus 'the end of the world' is the dead-end. Time travel has a DARK side, for sure. This highlights in a way the moral/ethical laziness of the human race. Where it gets a bit slushy--aka a bit unclear--is the TIME TRAVEL itself. Instead of the time travel being lovely little loops or such, imagine a Gordian knot. I simply don't know if any reader could truly "understand" or "comprehend" *ALL* of the time-trips and piece them together in any sort of order that would make sense.

In particular when there are multiple copies of each person in play. A middle-aged Jules and a middle-aged Ellis PLUS a teenage Jules and teenage Ellis.