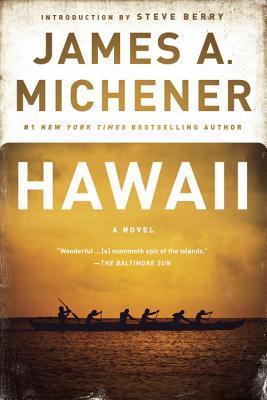 First sentence: Millions upon millions of years ago, when the continents were already formed and the principal features of the earth had been decided, there existed, then as now, one aspect of the world that dwarfed all others. It was a mighty ocean, resting uneasily to the east of the largest continent, a restless ever-changing, gigantic body of water that would later be described as pacific.

Will Hawaii be the longest book I read this year? That's WAY too early to call. I first decided to pick this one up after watching the film adaptation of Hawaii starring Julie Andrews as one of the missionary wives. The film adaptation covers a little less than one chapter of this one. For those that are curious, this book has SIX (and only six) chapters. The film adaptation keeps some things the same, (Abner Hale is an a**) but varies from the book in many ways.

It tackles about a dozen plus subjects--in varying detail--spanning roughly one hundred and fifty years. It uses about a dozen (maybe a little less) families to tell this story of ideas. For example, the descendants of the missionary families stay on in the background for the remaining chapters. The chapters do build on one another.

Business and economics, politics and religion--these are things he covers throughout the book. One of the main questions being -- What is best for Hawaii? Do outsiders do more harm than good? What makes Hawaii, Hawaii?

I thought many of the characters were horrible people. They just weren't likable. Especially some of the men. They were just jerks. It was easy to HATE some of the characters. Some of the scenes were just hard to take. Like when a grandfather takes his thirteen year old (maybe, maybe fourteen year old grandson) to a brothel and pays for him "to become a man." I really didn't want to be there for that--nor did I want to know about how excited the prostitutes were to have such a young client. There were other scenes as well that proved this one was out of my comfort zone.

The language is DEFINITELY not clean.

Being an Indie author means you need to be a multi-tasker. I write my books and initially edited them also. I learnt to design decent covers and also some marketing basics. But, gathering reviews was very time consuming and draining. I was referred to https://usbookreviews.com by a friend and my life became easy. They help me with gathering reviews for my book and also a boost to my marketing efforts with their complimentary ebook promotion. I am slowly building an audience who likes to read my books and feel like I made the right decision becoming an Indie author.