8. The Hitchhiker's Guide to the Galaxy 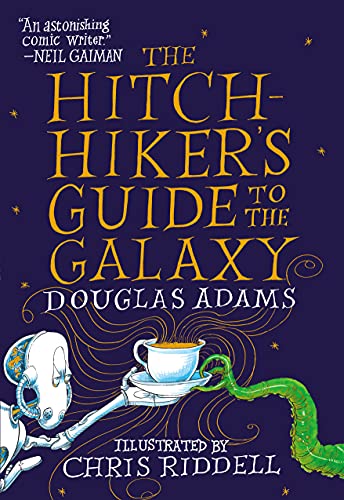 First sentence: The house stood on a slight rise just on the edge of the village. It stood on its own and looked out over a broad spread of West Country farmland. Not a remarkable house by any means – it was about thirty years old, squattish, squarish, made of brick, and had four windows set in the front of a size and proportion which more or less exactly failed to please the eye. The only person for whom the house was in any way special was Arthur Dent, and that was only because it happened to be the one he lived in. He had lived in it for about three years, ever since he had moved out of London because it made him nervous and irritable. He was about thirty as well, tall, dark haired and never quite at ease with himself. The thing that used to worry him most was the fact that people always used to ask him what he was looking so worried about. He worked in local radio, which he always used to tell his friends was a lot more interesting than they probably thought. It was, too – most of his friends worked in advertising.

The Hitchhiker's Guide to the Galaxy is all about the journey and NOT the destination. Arthur Dent, one of our heroes, is one of two survivors of Earth's destruction--the other being a stranded alien named Ford Prefect. Earth was 'set' to be demolished on the same day that Arthur Dent's house was set to be demolished... many adventures or misadventures follow once these two hitch a ride on a spaceship (or two).

The Hitchhiker's Guide to the Galaxy follows a dream logic of sorts. The less you think about it, the more you go with the flow, you can almost relax into the story and it works. It's silly and outrageous, but, you're content to go along for the laughs. It helps that it is quite quotable in places. But like a dream, the ending is abrupt. You can't help wanting to close your eyes and try to get back into the dream to see if you can wrap things up.

I like the cover,’ he said. ‘Don’t Panic. It’s the ﬁrst helpful or intelligible thing anybody’s said to me all day.’
‘I’ll show you how it works,’ said Ford. He snatched it from Arthur who was still holding it as if it was a two-week-dead lark and pulled it out of its cover.
‘You press this button here, you see, and the screen lights up giving you the index.’
A screen, about three inches by four, lit up and characters began to ﬂicker across the surface.
‘You want to know about Vogons, so I enter that name so.’ His ﬁngers tapped some more keys. ‘And there we are.’
The words Vogon Constructor Fleets ﬂared in green across the screen.
Ford pressed a large red button at the bottom of the screen and words began to undulate across it. At the same time, the book began to speak the entry as well in a still quiet measured voice. This is what the book said.
‘Vogon Constructor Fleets. Here is what to do if you want to get a lift from a Vogon: forget it. They are one of the most unpleasant races in the Galaxy – not actually evil, but bad-tempered, bureaucratic, ofﬁcious and callous. They wouldn’t even lift a ﬁnger to save their own grandmothers from the Ravenous Bugblatter Beast of Traal without orders signed in triplicate, sent in, sent back, queried, lost, found, subjected to public inquiry, lost again, and ﬁnally buried in soft peat for three months and recycled as ﬁrelighters. The best way to get a drink out of a Vogon is to stick your ﬁnger down his throat, and the best way to irritate him is to feed his grandmother to the Ravenous Bugblatter Beast of Traal.
‘On no account allow a Vogon to read poetry at you.’
Arthur blinked at it.
‘What a strange book. How did we get a lift, then?’
‘That’s the point, it’s out of date now,’ said Ford, sliding the book back into its cover. ‘I’m doing the ﬁeld research for the new revised edition, and one of the things I’ll have to do is include a bit about how the Vogons now employ Dentrassi cooks, which gives us a rather useful little loophole.’
A pained expression crossed Arthur’s face. ‘But who are the Dentrassi?’ he said. ‘Great guys,’ said Ford. ‘They’re the best cooks and the best drinks mixers and they don’t give a wet slap about anything else. And they’ll always help hitchhikers aboard, partly because they like the company, but mostly because it annoys the Vogons.

Vogon poetry is of course the third worst in the Universe. The second worst is that of the Azgoths of Kria. During a recitation by their Poet Master Grunthos the Flatulent of his poem ‘Ode To A Small Lump of Green Putty I Found In My Armpit One Midsummer Morning’ four of his audience died of internal haemorrhaging, and the President of the Mid-Galactic Arts Nobbling Council survived by gnawing one of his own legs off. Grunthos is reported to have been ‘disappointed’ by the poem’s reception, and was about to embark on a reading of his twelve-book epic entitled My Favourite Bathtime Gurgles when his own major intestine, in a desperate attempt to save life and civilization, leapt straight up through his neck and throttled his brain.
The very worst poetry of all perished along with its creator Paula Nancy Millstone Jennings of Greenbridge, Essex, England in the destruction of the planet Earth.
All right,’ said Ford, ‘just stop panicking!’
‘Who said anything about panicking?’ snapped Arthur. ‘This is still just the culture shock. You wait till I’ve settled down into the situation and found my bearings. Then I’ll start panicking!’
‘Arthur, you’re getting hysterical. Shut up!’ Ford tried desperately to think, but was interrupted by the guard shouting again. ‘Resistance is useless!’