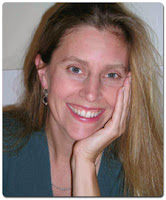 Anna Dewdney is a children's book author and illustrator. Her works include Llama Llama Red Pajama (2005), Grumpy Gloria (2006), and Llama Llama Mad At Mama (2007). And according to Reviewer's Checklist, she has another book being released in January 2008 called Nobunny's Perfect. And although her website doesn't give a release date, she does mention that there will be another Llama Llama book, this one called Llama Llama Misses Mama. You can read her biography here on her website. Her website is great, by the way, and has activities for little ones and information for grownups. What kind of activities? PDF activity pages! From Llama Llama paper dolls, to connect-the-dots fun, to word searches, to coloring pages, to a maze. You can find those files here. I haven't read Grumpy Gloria for myself, but her other two works I adore. 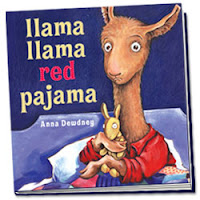 As I mentioned a few weeks ago, Llama Llama Red Pajama by Anna Dewdney is one my favorite favorite picture books. The reason I haven't blogged about it is simply that I hadn't started my blog yet when it was released. And sometimes it does take a little while to go back to old favorites when there are so many new books being released each month. But with the upcoming release of Llama Llama Mad At Mama in September, I thought now would be a perfect time.

Baby Llama with some separation anxiety issues. As his mother is putting him to bed, he is happy and soothed. But as soon as she leaves the room, he begins to miss her.

Baby Llama wants a drink.
Mama's at the kitchen sink.

Llama llama
red pajama
calls down to
his llama mama.

But as the Mama Llama becomes distracted with household tasks and phone calls, Baby Llama goes from a little fretting to a full-out llama drama. But soon all is calm once again as Baby Llama is reassured of his mama's loving care as he drifts off to sleep.

I will be reviewing Llama Llama Mad at Mama very soon. It will be released in September 2007.
Posted by Becky at 8:42 AM