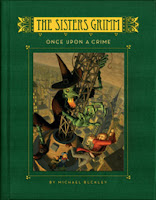 Buckley, Michael. 2007. Sisters Grimm: Once Upon A Crime.

I've made it no secret how much I absolutely adore the Sisters Grimm series. (Just so you know, the first three are now available in paperback. The fourth, Once Upon A Crime, was released in early May. The fifth, Magic & Other Misdemeanors, will be released this fall. Amazon lists a December 1 release date.) Once Upon A Crime features many of the same characters that have appeared in the earlier books, but as always Buckley adds in a generous sprinkling of new characters: Titania and Oberon, Cobweb, Moth, Oz, Ebenezer Scrooge, Mother "Mama" Goose, Sinbad, Long John Silver, a fairy godmother, and a couple of fairy godfathers. And that's just to name a few.

Once Upon A Crime opens much where The Problem Child left off. We see Sabrina and Daphne on a trip with Granny Relda and Mr. Canis--not to mention a wounded and possibly dying Puck--to New York City. And also Mr. Hamstead. Ernest Hamstead, one of the three little pigs. The family hopes that they can find the kingdom/land of Faerie and get Puck some much needed medical attention. Why New York City? That's where many EverAfters settled BEFORE the town of Ferryport was sealed to keep them in. They find Faerie sure enough--but it's not in very good condition--but Puck is relunctantly taken in and treated. It seems Titania is happy to have her son back, but Oberon is less than pleased to welcome him back home. But what seems like a good beginning, turns dramatically tragic when Oberon is murdered. Now Faerie is really chaotic. And it is up to the Sisters Grimm to solve another case. And to protect Puck.

The adventure is just beginning, and this holiday season--the book closes on Christmas Eve--will be unforgettable for the Grimm family.
Posted by Becky at 2:17 PM

Hi everyone!
If you have read the Sisters Grimm books dont they rock! If you havent then you should! I like them because they are full of action, adventure, excitement, and a slowly moving relationship between Sabrina and Puck. As a reader of all five of the books out I personly say that they all are sooo great! I can’t wait until the sixth one comes out. I heard that Mr. Canis, a dear friend and protector of the Grimm family, is put on trial for past crimes. Considering that he’s the Big Bad Wolf, he has a lot to answer for. Is there any truth to the story told by Little Red Riding Hood? What’s the deal with all that huffing and puffing? Will Mr. Canis be forced to answer for his crimes?
A court of Everafters, led by the cruel Queen of Hearts, is determined to find Canis guilty and force the Grimms out of Ferryport Landing. Meanwhile, Puck has decided to focus more on his mischievous ways, making a few new troublemaker friends. So it’s up to Sabrina and Daphne to find evidence to save Canis—and their investigation may reveal more than they hope for!
Doesn’t that sound very interesting! I just can not wait until it comes out! I also heard that the other, Michael Buckly, is aiming for making the series nine to ten books long!

I also have to say that my favorite characters in The Sisters Grimm books are Puck and Sabrina. I hate to admit it but I hope they start to like each other more in the next book, Tales From the Hood. But i also hope that they still bug each other like crazzy. If the author ever is reading this I want to tell you, Michael Buckley, that I hope that Puck is more active in all of these next books!
Thank you for your time.

The Sisters Grimm totally rocks! I'm so anxious for the next book,Tales from the Hood. I can't help but wonder, can Mr.Canis be saved? And what is the weapon Hamstead gave Daphne? I read a preview of the sixth book and can't stop thinking about the sentence "Puck has decided to focus more on his mischievous ways, making some new troublemaker friends...." How could Puck leave the Grimms in their time of need? Espeicially Sabrina (whom he loves) The last couple of books it's been like 'Puck and Sabrina sitting in a tree k-i-s-s-i-n-g!' And what's up with Uncle Jake and Briar Rose? Anyway I hope Sabrina and Puck kiss in this book!

Hi Lauren!
I love your comment!
I think I am one of the books biggist fans too!
Well type to u later!
-Hallie the almost 12 year old who loves the Sister Grimm books.

Hi! It is Lily from Australia and I absolutely LOVE The Sisters Grimm. Like most people my fave characters are Sabrina and Puck! I just wish they'd admit they like each other or SOMETHING! I haven't read book 6 yet but I know it wiil be good. I might have to order it in again like I did for book 5. I hope Mr Canis gets out free. GO SABRINA + PUCK!! :)