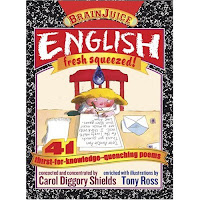 Divided into three sections (rules, tools, and school and beyond) Brainjuice English presents 40 poems on some of the essentials taught in the English classroom. Don’t think there is a way to make grammar fun? Read some of these poems, and you might just be surprised to see yourself smiling.

A verb and noun met up one day.
Said the verb, “I think you’re sweet!
Together, you and I could form a sentence that’s complete.”
Noun winked. Verb grinned. A simple life they lived.
She gave him several adverbs, he brought her an adjective.
They added a conjunction, and when the time was ripe,
They had a little clause, of the independent type.
Prepositions followed, and then, without a pause,
They found they were the parents
Of a cute dependent clause.
The noun and verb both smiled and sighed,
“Our sentence sure has grown.
Though it is now compound-complex,
It’s still our home sweet home.”

From Brainjuice: English by Carol Diggory Shields, 22.
Posted by Becky at 10:01 AM

My "little clauses" were always of the independent type. :) This is very clever.

Reminds me of Mr. Morton and Pearl from School House rocks Parts of a Sentence romance.