Have you seen the new Narnia covers yet? They're illustrated by David Wiesner. The covers (link shows the covers BIG) are sparking some interesting discussions in the blog world including this great article by Bookslut. "Weisner’s a superb illustrator, but the Narnia books, with their weird pagan/Christian allegories, pocketknife-carrying children, and genuine moments of terror, are a poor match for him. It appears that a whole new generation of children will be traumatized by bad cover art -- much as I was, as a tender youth, by the disembodied lion’s head on the cover of the '70s paperback edition of Wardrobe sequel The Horse and His Boy. Beloved book, regrettable cover. These are the tragic intersections that beget design critics." I'm not one that is opposed to change just because it's change. After all, these books have seen many covers come and go through the years. Many styles. Many tones. Many moods. I've read the books in various covers. I'm not necessarily attached to any one of them. I would actually if picking a list of my 'favorites' probably mix and match a set between the various illustrators. (Okay, maybe that's not exactly true. I'll let you know my real favorite later on.) My point is that there is not one "right" way for Narnia to be depicted. Though there can probably be concensus on how it shouldn't be done.

I was introduced to Narnia by my fourth grade teacher. A formidable woman under most circumstances. But I will always, always appreciate her for the fact that she read The Lion, the Witch, and The Wardrobe aloud to her class. The set of books that I got soon afterwards were the aforementioned paperbacks from the seventies. I devoured the series. My sister and I shared them, though I was the biggest fan by far. We added a few more copies now and then when we saw them at the used bookstore or a garage sale. You can never have too many copies of a favorite. Especially when they're paperback to begin with. So I was familiar with Pauline Bayne's cover of The Lion, The Witch, and the Wardrobe as a child. It had a completely different mood. It depicted children gayly playing--leaping, skipping, and dancing around the lion. It is springtime. Not winter. It's happy, yes. But it doesn't really let you know that the book is about the struggle of good and evil. It has no dark overtones. There is no oppression.

But the art is nice. She was the first. Some might argue that she was the best. She is the one who illustrates the stories inside the books after all. Pauline attended the Slade School of Fine Art, where her sister was completing a diploma course, but after only a year she volunteered to work for the Ministry of Defence, painting camouflage. However, since her kind of attention to detail and accuracy were skills essential for map-making, she was soon transferred to another department to draw maps. This experience was very helpful when she later drew maps of Narnia for Jack, and of Middle-earth for his friend J.R.R. Tolkien. Over the years Pauline Baynes has created many new illustrations for use on book jackets, as well as colouring the original illustrations. In addition, in 1989, she made a series of full-page colour paintings for two books, one called The Land of Narnia, and the other a beautiful, deluxe version of The Lion, The Witch and The Wardrobe. She was awarded the prestigious Kate Greenaway Medal in 1968 in recognition of her outstanding contribution to children's illustration.
I do like the fact that she drew the maps for both Narnia and Middle-earth. But if I had to pick a favorite and best illustrator for Narnia it would be the series of covers done by Chris Van Allsburg. They're beautiful. They're moody. They're practically perfect in every way. 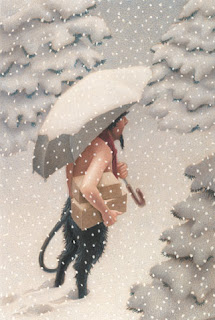 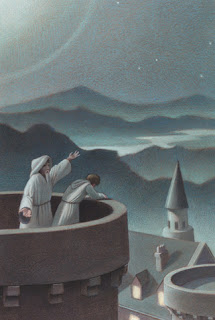 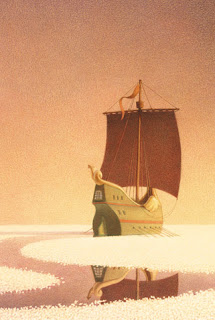 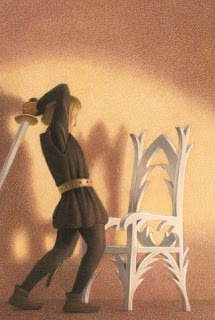 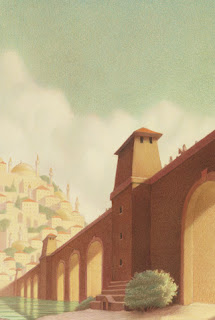 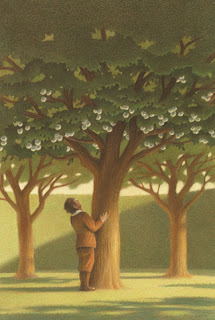 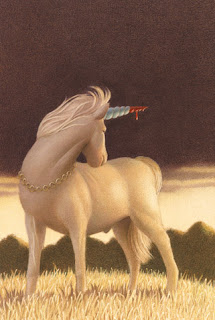 To see the various covers for each one:

That being said, I really love Wiesner's version of Voyage of the Dawn Treader. I love the depiction of Eustace as a dragon--a weeping dragon. It is perfect for the book. I also enjoy his cover for The Silver Chair.

I continue my discussion at Reading with Becky. I plan to do this with each one of the series. Today is The Lion The Witch and The Wardrobe.

More of the seventies versions: 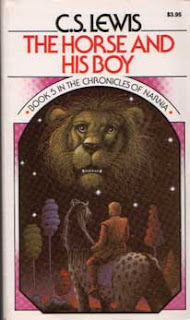 I don't think any of the others come close to the "traumatizing" nature of these. It's amazing that anyone would pick them up and read them unless they already knew what treasure awaited them inside. They definitely don't say "read me."
Posted by Becky at 1:55 PM

I love this post! It inspired me to post one of my own cover comparisions of my blog.

The Allsburg illustrations are gorgeous! I've never seen those..I'll have to find them! My newest set is horrible, but I found them cheap so I picked them up just for a reading copy. They came out around the same time as the movie and have a more "realistic" look to them and what bugs me more than anything is the order that they put them in in the box set! Leave them in the original publication order! lol...

I know the ones you are talking about :) While they're not the worst of the bunch, I do prefer my Allsburg set. I'm glad I bought them when I did. I continued my discussion of The Lion, The Witch, and The Wardrobe over on my other blog:

But I wanted to say this, at least in a boxed set you can rearrange them accordingly. You can't do that with the omnibus (seven-in-one) editions. I admit I'm a bit obsessed here. But I'm so *worried* that something will happen to my Narnia that I have so many "spare" copies stacked up. I have two 7-in-1 and one boxed set (the Allsburg). But for the record, one of the omnibuses I only paid about three or four bucks. :)

I've always liked the cover of 'The Lion, The Witch and The Wardrobe' with the illustration by Pauline Baynes. Old covers are nicer than new, modern ones. Nowadays, I see new covers that don't really go well with the story!

Anyway, how about doing a tag?

3 or 4 bucks?! That's awesome! I saw a hardcover Omnibus edition at B&N last night for $9.99 and almost bought it...it was nice too, but I passed. I quickly re-arranged my box-set when I got it ;) But it still bugs me, because they put numbers on the spines of the book, so now the numbers are out of order, but the books are IN order...lol, yeah I think I may have a bit of OCD!

And kids judge a book by its cover so much more than adults do. They really are drawn into books by the art, I think. At least, I was. I never read the Narnia series til I was an adult, because my cousin owned a set with those 70s covers, and they didn't look appealing at all, even though she kept telling me how much she loved the series.

I would have been tempted by the hard cover too. Despite the fact that I have the same thing in softcover--two copies actually. I wish they wouldn't number the spines, as you said, but I can live with them being out of order. No one is going to make me *read* them out of order though. :)

I agree, Dewey. A lot of people--kids and adults--judge a book by its cover. I am amazed that ANY one would be drawn to the seventies covers. It would be interesting to *know* (though impossible to know of course) if those covers attracted any new readers to the series when they were released. Or if they were just circulated about by people who already knew the glory of Narnia. Because they're very unappealing.

I think some of the newer covers do a great job of "drawing" people in. The Wiesner covers are growing on me though. I still prefer the Van Allsburg ones though.

Does anyone know if I could purchase Van Allsburg's book covers as separate pieces? I've tried to search the artists website, but no luck. I'd love to have some Narnia themed wall hangings, and these would be perfect to frame...