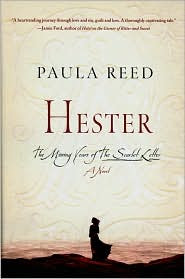 If it is a lonely life to be the embodiment of sin, lonelier still it is to be a legend.

This may sound strange, but I read The Scarlet Letter so I could read Hester. And I wanted to read Hester because I fell for the first line of the prologue.

How does Hester compare to The Scarlet Letter? Well, it's easier to read for one thing. The characters are actually well-drawn, quite human. The characters stand for more than a single symbol (or two). Pearl is more than just a wild child--a wicked little devil in the making. Hester is more than her shame, her guilt.

Hester focuses on the "missing years" of The Scarlet Letter. The beginning sees her setting sail for England with Pearl, and the close sees her returning--alone--to America, to New England. Paula Reed imagines Hester becoming involved--for better or worse--with the politics of the day. Reed imagines Hester with a unique gift of sensing others' sins. Not reading their minds, exactly, but sensing their sins, their secrets. Her time wearing the scarlet letter has left her with the ability to reflect people's sins, their hypocrisies. Oliver Cromwell learns of her "gift" and wants to use her, manipulate her, "for the good of the country." He hopes that Hester can determine which men are traitors, which men are plotting his downfall, which men are secretly Royalists wanting the return of Charles II.

But just because Hester has this "gift" doesn't mean that she is comfortable using it. That she is happy that the men in her life want to use her in their political games. Because Cromwell isn't the only man in her life. (There is one man much, much closer. A man Hester finds difficult to read. A man who urges Hester to doubt everything--to question sin, guilt, shame, prayer, God, etc. He says sin doesn't exist, that if you don't believe in sin, well, then you're free from the guilt, the shame. Sin is just something you're taught to believe in. If you let go of those beliefs, then you can be happy, you can make your own choices. Her friendship with John Manning causes her to reflect on her past, on her relationship with Arthur...

I didn't love everything about this one. (I didn't like Manning's beliefs, for example.) But I did enjoy seeing the characters come to life. I had a hard time connecting with the one-dimensional characters of Hawthorne.

The premise. I was very skeptical. And in a way, I still am. But when I was reading the novel, I was so in the moment that I didn't stop to think about it all that closely. Because the writing kept me reading. I may not have loved every minute of it, but I was still engaged for the most part. The book did make me curious. I'd love to read other books set in this time period--to read more about Oliver Cromwell and Charles II.


© Becky Laney of Becky's Book Reviews
Posted by Becky at 8:08 AM

This sounds super interesting. I had to read The Scarlett Letter in high school and enjoyed it - though I found the prologue or whatever offputting.

I'll have to keep Hester on my radar. Thanks for the review.

I remember liking The Scarlet Letter when I read it (like Jessica) in highschool. I didn't know anyone had written another take on the story- so I might find this one interesting.

Thanks for the great review! I read The Scarlett Letter in high school, and also liked it.

What a neat choice for this part of the Take Another Chance Challenge. It always excites me when authors take on one of the classics and reimagines some aspect of it.