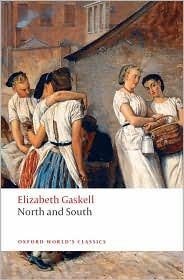 Is it a romance? Is it a novel of two different social classes battling it out? Is it a novel about the industrial revolution that was for better or worse changing the world, changing life as they knew it at least, transforming it into who knows what? Is it about the ethics of business, and the responsibilities of the middle class? Maybe a little bit of all the above. 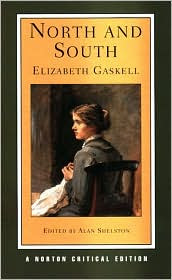 Margaret, our heroine, is a dutiful daughter. (But that doesn't mean she doesn't have opinions. And that doesn't mean she'll keep quiet about having opinions either.) She accompanies her parents to the Northern town of Milton. Though she'd much rather have stayed in the South, in the comfy-cozy parsonage where she spent so many happy years. But after her father, Mr. Hale, decides he has to split from the Church--that he has to give up his vicarage, well, the family moves to the North. (It's not so much what is best for the family that is to be considered, but what is best for Mr. Hale has to be what's best for his wife and daughter.) Mr. Hale becomes a tutor, a teacher to the young men (and some older men) in this manufacturing town. (Not that the town has high goals for education. No, it's all work all the time, in some ways.)

One of her father's favorite students is Mr. John Thornton. He is a mill owner. One of the wealthier folks in the town of Milton. He is one of the first people in town that Margaret meets. And you might say that neither got a fair impression--a true impression--of the other. And Miss Hale doesn't make the best of impressions on John's family either. His mother. His sister. But John--for better or worse--can't help being distracted by Margaret. It doesn't matter what his mother has to say on the subject. There's just something about Margaret that keeps her on his mind. All the time. Even when he has no reason at all to hope... 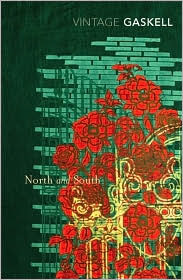 What does Margaret think of John? Well, it's complicated! It almost always is in these classics isn't it!

If you listen to audio books, you should consider listening to North and South. Naxos released an unabridged edition of the novel this past February. (I believe there is an abridged version available as well.) It is read by Clare Wille. I'm not quite finished with the audio book. (I read faster than I listen.) But what I've heard so far has been good.

*The Oxford edition I read was published in 1998. It doesn't match the cover though. The cover is from the 2008 Oxford edition.
**One of my favorite descriptions comes towards the end of the novel. When Margaret returns to her old town, and learns about the new vicar and some of the changes that have happened during the years she's been away:

'Times is changed, miss; our new Vicar has seven children, and is building a nursery ready for more, just out where the arbour and tool-house used to be in old times. And he has had new grates put in, and a plate-glass window in the drawing room. He and his wife are stirring people, and have done a deal of good; at least they say it's doing good; if it were not I should call it turning things upside down for very little purpose.' (387)

That is such a GREAT description of a church, a congregation, getting a new preacher. At least in my experience.

I enjoyed your review of North and South. I am planning to read it sometime this year. I am currently reading Cranford but North and South sounds more like my type of book. I watched Wives and Daughters but never read the book.

Have you seen the film version of North and South? I have heard it is good. I may watch the movie first and then read the book. I usually read the book first but when it comes to classics I prefer to watch the films before reading the books. It is how I became a fan of Jane Austen's works.

I just finished Cranford and loved everything about it. I can't wait to get to North and South.

Lovely review, Becky! I'm so glad you liked it - it's one of my favourite books ever. Oh, and you'll really love the drama-version too. :) L.

Becky, if you love Mrs. Gaskell, how can you possibly detest Dickens? Heavens, they were even friends! :-)

Annette, I haven't tried Dickens as an adult. My *only* experience is required reading of Great Expectations :) I *do* plan on giving Dickens a go. I'm really really hoping that he'll become a friend.

I hated Great Expectations when I read it as a freshman in high school, but loved it as an adult. It's one of my favorites of his now.

Just thinking about Richard Armitage playing Mr Thornton in the tv adaptation of North and South makes me squeeeee! It's worth a watch, I think. I watched it (again) a few weeks ago and I really felt like reading the book again. I haven't given any of Gaskell's other works a try though.. perhaps I should.

Welcome to the club of N&S fans! I just LOVE that ending :)