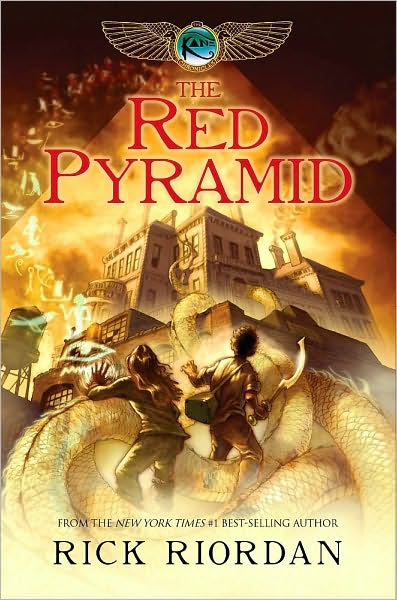 We only have a few hours, so listen carefully.
If you're hearing this story, you're already in danger. Sadie and I might be your only chance.
Go to the school. Find the locker. I won't tell you which school or which locker, because if you're the right person, you'll find it. The combination is 13/32/33. By the time you finish listening, you'll know what those numbers mean. Just remember the story we're about to tell you isn't complete yet. How it ends will depend on you.
The most important thing: when you open the package and find what's inside, don't keep it longer than a week. Sure it'll be tempting. I mean, it will grant you almost unlimited power. But if you possess it too long, it will consume you. Learn its secrets quickly and pass it on. Hide it for the next person, the way Sadie and I did for you. Then be prepared for your life to get very interesting.

The Red Pyramid is narrated by Carter and Sadie, a brother-sister team who hold the fate of the world in their hands. Carter has spent most of his life traveling the world with his father, Dr. Julius Kane, an archaeologist who specializes in Ancient Egypt. Sadie, his sister, has spent most of her life living in England with her grandparents--the Fausts. She only sees her dad and her brother a couple of times a year. (It's been like that since their mother's tragic death). But one Christmas Eve, everything changes. Because that is when Dr. Kane accidentally-on-purpose explodes the Rosetta Stone in the British Museum. And life is never the same for these two after that.

Carter and Sadie discover many things in The Red Pyramid. For starters that Egyptian gods and goddesses are very real. And that they can be unleashed in the modern world with great big consequences. Sometimes for good, sometimes for evil. One god, Set, is out to destroy the world. And it falls to these two kids to stop him. Of course, they aren't working all on their own. But just who is helping, well, I'll let you discover that on your own! Then there are the family secrets--details about just who these two children really are...and their connection with the House of Life, a secret order of magicians.

If you're a fan of Rick Riordan's Percy Jackson and the Olympians series, chances are you'll pick this one up no matter what I say, no matter what any reviewer says. How do I think these two compared? Well, that's tough.

I think The Red Pyramid is a bit longer than The Lightning Thief. I felt it to be a bit weightier as well. So much time is spent setting everything up. The little details here and there that give a richness, a depth, to this fantasy world, but at the same time slow it down just a bit. (Not enough that I would ever stop reading, stop caring. Just that I wasn't able to speed through this one.)

I think it's an interesting choice to have two narrators with different strengths and weaknesses. Interesting to have biracial narrators facing their own challenges--you know in addition to facing the powers of evil. (Carter is darker than his sister, and sometimes people don't realize that these two are brother-and-sister. Especially since their mom's death. And he has faced some discrimination in his life. And Sadie, well, Sadie has some issues with her dad's lack of involvement in her life.)

I can't say I feel as connected with either Sadie or Carter as I did with Percy Jackson upon first reading it. That's not to say that these two may not grow on me with further reading. (Bast just isn't Grover. And the baboon Khufu just annoyed me.) But I would definitely want to keep reading more of this series!

I did enjoy The Red Pyramid. I found it to be an enjoyable, interesting read. I would recommend it.

© Becky Laney of Becky's Book Reviews
Posted by Becky at 11:51 AM

I just stole The Lightning Thief off of my son's bookshelf. If I enjoy that series (which I probably will looking at all of the reviews out there), then maybe I will give this one a try. Thanks!

This sounds like a good book. If you are interested I just started doing what you do (write reviews about books) and I don't have many readers yet so go check it out http://jagteenbookreview.blogspot.com/

I am looking forward to reading this one. I like Egyptian mythology so I'm sure it will hold my interest. I did wonder if maybe this one would skew a little younger than the Percy Jackson series but I've read so many positive reviews (including your own) that I think I should enjoy it. Great review!