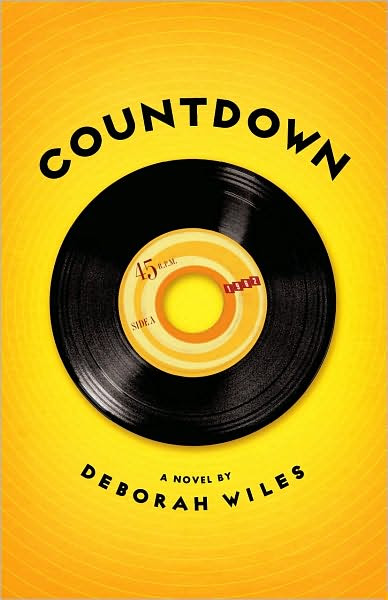 I am eleven years old, and I am invisible.

Countdown is a documentary novel. What does that mean exactly? Deborah Wiles weaves fact and fiction together in an amazing way. The setting is a tense one: October 1962, for those not in the know, that means the Cuban Missile Crisis.

Our heroine is a young girl (a middle child) named Franny Chapman. This is her story. I loved just about everything about Franny. She loves to read. (She loves reading Nancy Drew, for example). She loves to read aloud. (She often reads ahead while waiting for her turn.) She doesn't always understand her older sister, Jo Ellen. She often doesn't like her younger brother, Drew, because her mom thinks he's perfect. (Though she'd protect him at any cost.) She doesn't always get along with her mom either. And then there is her Uncle Otts.

I think Wiles did a great job with her characters--both major and minor characters. They are all so human, so believably human. I loved the complexity of the relationships. I loved seeing how Franny faces the conflicts in her life. Like her best friend that isn't feeling like much of a best friend lately. Like the boy who has just moved back into town and is now oh-so-cute. And that is just the start of the growing pains in this one...

And the writing is oh-so-amazing. It has character. It has style. I felt I knew Franny immediately.

Jo Ellen has the world's best 45-rpm record collection. Since I can remember, I've sprawled across her big bed when she's in her room doing homework or talking on the phone to her girlfriends, and Jo Ellen has let me play her records, as long as I don't get fingerprints on them or let the needle scratch them. I'm not allowed to touch her albums, but the 45s she lets me rifle through to my heart's content.
I've memorized the geography of every one of those records. "Johnny Angel" has a yellow label, "Twistin' the Night Away" has a tiny scratch at the beginning edge, and "Runaway," which is my current favorite, by my favorite singer, Del Shannon, has a heart drawn on the label--by me. Jo Ellen doesn't know this yet. (75-76)

My first concrete remembrance of church is going to revival with Miss Mattie in Halleluia, Mississippi. I like revival. It's entertaining. I know almost every hymn in the Methodist hymnal by heart, every verse, and I can play most of them on the piano.
Revival lasts two weeks, so we go every night to church, and every night there is tarnation preaching and seventeen verses of "Just As I Am," until someone walks up to the altar to be saved.
Trouble is, Halleluia is a small town, and most everybody in church has already been saved. So unless somebody new shows up, or an older kid is pushed into the aisle by his mother, we just sing and sing that hymn, until my grandmother stands up and ambles in her square shoes up the aisle with a half-exasperated look on her face, and gets saved once again. Mostly she is saving all of us, and she knows we know it. (130)

Here is a conversation between Franny and Jo Ellen:

"Nobody's the favorite, Franny," she says. "Of course you're important. Just because they don't broadcast it--"
"You're not around enough to notice," I interrupt, standing up straight. "You're all grown up, you're in college--you have loads of friends--you even have new friends! You can do whatever you want."
"That's certainly not true," says Jo Ellen.
I sigh. "I just want to skip all these years in between and go off to college like you, only I want to live in the dorms like Lannie does."
"This, too, shall pass. You don't know how lucky you are, Franny. You go to a good school, your dad's an officer in the military, you eat, shop, play wherever you choose, you can go to any college you want when you grow up. You've got it made. You're privileged."
I toss the tissue in the trash. "I'm invisible around here. I could disappear for days and nobody would miss me."
Now it's Jo Ellen's turn to sigh. "Franny, you're eleven. That's the problem in a nutshell." She pulls an envelope out of her purse. "Everybody feels persecuted when they're eleven. It will pass." (85)

This book had me at hello. (There are grooves on the record. How fun is that?!) As if that wasn't enough to make me fall in love, this documentary novel is packed with images, photographs, quotes, lyrics. (Everything from photographs of JFK and other world leaders, other politicians, other leaders to Miss America, to images from the Civil Rights movement, to a cover of a Nancy Drew novel.) So while Countdown is a novel, it also serves as a scrapbook. (You can see some of what the book looks like on the author's blog.)

I think this one does a good job of capturing a time, a place in American history. It is rich in detail. (For example, I loved hearing about the wonder, the novelty of McDonald's hamburgers--for Franny and her family.) I loved, loved, loved this one! And I'd definitely recommend it!!!

It has received FOUR stars. One in Kirkus, one in Booklist, one in Publisher's Weekly, and one in Horn Book.

This sounds really good. Love the passage about the grandmother at revival. Thanks for the great review!

Wow, what a glowing review - and FOUR stars, really?! I'll definitely have to check this one out.

This sounds like an interesting read. Thanks for the great review...seems like you really enjoyed this one.

I have this one on deck for the 48 Hour Book Challenge. I'm glad to hear it's a good one! I've already looked at many of the pictures.