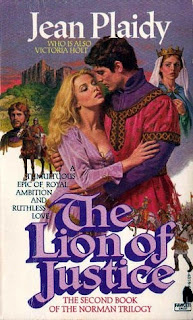 Nature's takin' over my one-track mind
Believe it or not, you're in my heart all the time
All the girls are sayin' that you'll end up a fool
For the time being, baby, live by my rules

The Lion of Justice is the second book in Jean Plaidy's Norman trilogy. Yesterday, I reviewed the first book in the series, The Bastard King. The Lion of Justice focuses on three of William the Conqueror's sons: William Rufus (William II), Robert (duke of Normandy), and Henry (Henry I). It tells the story of William II's brief reign, his mysterious death in the forest, and Henry I's reign. In part the story is told through his queen.

We meet the future-queen as a young woman named Edith. She is royal: the daughter of the king and queen of Scotland. She is also among the last of the Saxon royal dynasty. The novel opens with Edith and her sister, Mary, going to a convent for safekeeping. They have an aunt there who is convinced that Edith should take vows and become a nun. Edith finds the idea repugnant. Equally repugnant to her is marrying an old man of the William II's choosing. There are two close calls before she is married to King Henry. Readers definitely know more of Henry than she does! One other thing that you should know: he makes her change her name to Matilda; Matilda was his mother's name.

There is a good reason why I quoted Lou Christie's Lightin' Strikes at the start of this review. Henry I is depicted as arrogant and lusty and selfish. He's repugnant. And he's able to fool Matilda for several years at least. She actually believes all his lines. She actually trusts him. He seems a bit surprised that there is any woman so gullible and naive to buy what he's saying. He almost seems relieved when she confronts him to see if it is the truth.

In my opinion, the back of the book LIED. Its description: A DAZZLING PORTRAIT OF A MAN FOR WHOM COUNTLESS MISTRESSES WEREN'T ENOUGH--AND ONE GIRL WAS EVERYTHING. Henry married Matilda because she was Saxon royalty. It was a politically advantageous match for the kingdom's good. He didn't dislike her. But she was never his everything. I get the impression that women were completely interchangeable to him. One being very much like another.

Did I like it? It wasn't so much a matter of liking or not liking. I found it quite readable. I often found Henry infuriating, and I suppose I thought a lot of conversations to Matilda, not that she could hear me. I am glad I read on in the series!


"And what has he ever done but bring trouble and bastards into the realm?"
The young man laughed obediently.
"Come, my fine friend, what is there to laugh at? I am a man beset by brothers, and now Henry has squandered his patrimony and roams the countryside seeking consolation in robbing ladies of their virtue since he cannot rob me of my throne." (22)

It had been at this time that Henry had become so incensed against his brothers. He said they ignored his existence; they forgot that he was also their father's son, and he demanded to know what his inheritance would be.
"The ladies of England," retorted Rufus. "And I doubt Robert would debar you from enjoying the Norman ones when you visit his Duchy." (25)

"Why have you come to see me?" she asked.
"Because my inclinations first prompted me and then insisted. They would not be denied."
"The sisters are right. It is unseemly."
"That which is unseemly is often delightful you will discover." (89)

He was laughing at her. He took her hands suddenly and kissed her fingers.
"Then," he said, "You like me well."
"Yes," she answered. "I like you well."
"And when I am King you will be my Queen."
"I could ask nothing more of life."
"Will you be a good wife to me?"
"I will."
"And love me tenderly and bear my children."
"I will."
"Why 'twould seem we are married already. Would there were a priest here who would marry us, and  bridal chamber where I could make you my wife in every truth." (90)

When Henry rode back from Wilton to Winchester he was feeling more than ever dissatisfied with his fate. The Princess Edith was not uncomely; her innocence was amusing and she could give him some diversion which he could not find with his many mistresses. Moreover it was time he was married. He was thirty years of age and he wanted sons. Edith had interested him; he had seen more beautiful women...It was said that he had more bastards than any man in England. (93)

Henry was too clever not to know himself, and that he was the most fitted to rule of all his brothers. (94)

He thought a little of the virginal Princess to whom he had talked of marriage. She was in love with him already. She would be submissive. He liked a little spirit in his women; on the other hand variety was always enticing; and marriage would be a new adventure. (95)

"You always had the right answers. I wonder if Matilda will find it so?" (143)

Well, she who was so innocent of the world would have to learn, and when she did, as she inevitably must, she would after the first shock settle down to be a loving wife and when she produced the heirs of the kingdom she would be a good mother. That should satisfy her so that when he strayed--as he surely would--she would come to accept this state of affairs as a natural course of events. For the time though he feigned to share her ecstatic happiness. (151)

It was one of those occasions when he wondered what she would feel when she discovered the truth about him, which he supposed she would in due course. When he began bringing his illegitimate children to Court and bestowing favours on them, which indeed he must, he hoped she would not be too badly hurt. It might well be that by the time she would have more understanding of the world. But it was disconcerting when she showed so clearly that she looked upon him as a knight of shining purity. He supposed he was growing fond of her. (163)