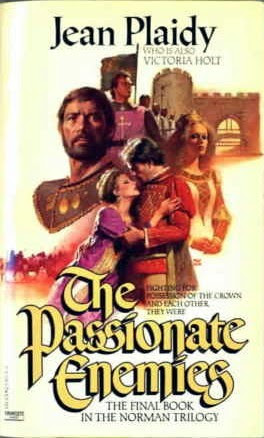 The Passionate Enemies has a laughable jacket description. Definitely leaning on the side of ridiculousness:


She was Matilda.
The arrogant, cold daughter of Henry I. An empress, a woman who had worn out one aging husband, only to dominate her next, a mere boy, Geoffrey, first of the fiery Plantagenets.
Only one man had ever mattered to Matilda, ever since childhood.
He was her cousin. He was married. He was her true love.
He was her rival to the throne -- her enemy...
He was Stephen.
A man who used honey in a land of warriors, who sweetened whatever cup would toast his claim to the throne.
And the only obstacle in his path toward ruling all of England and Normandy was Henry's daughter, his own cousin, his one true love.
Forever to fight.
Forever to love, they were...
THE PASSIONATE ENEMIES.

The Passionate Enemies falls into the so bad it's almost good group. I definitely enjoyed The Bastard King more than this one. This is the third book in the trilogy. The middle book is The Lion of Justice. Stephen and Matilda's "love story" begins in the second book. Considering the fact that she left Henry I's court to marry when she was so very young (at most 12 or 13), there are so many creepy layers to this one. (NOT that I'm saying The Passionate Enemies is creepier than say Flowers in the Attic. That would be impossible!!!) 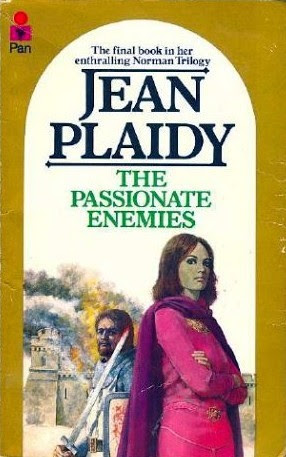 The book begins with the tragedy of the White Ship. Henry I loses his son and heir, William. While Henry I has scores of illegitimate children, he has only one other legitimate child: Matilda. His first idea is, of course, to remarry and have a new son. But after years of waiting for this new wife to conceive, he admits that it isn't to be. He then decides that Matilda will be the one. But can he convince a nation to be be ruled by a Queen? Only time will tell.

Meanwhile, Stephen, is the ever-hopeful nephew. He wants his uncle to name him as heir. He is desperate to be king. If only he wasn't married to ANOTHER MATILDA, he would try to marry his cousin, Matilda. (By the way, the two Matilda's are cousins as well.) Life would be perfect if Matilda and Stephen could "share" the throne. The reader is "privileged" to all of Stephen's daydreams about his cousin.

The battle between Stephen and Matilda begins after Henry I's death...

The book is readable. I couldn't say I enjoyed it exactly. It is so dramatic and ridiculous in places. But it's never boring.


Stephen practiced charm on all so that when it was turned on those who could bring him great good, it seemed to be used naturally and without sly motive. (9)

Stephen lingered over that name. Matilda. It was more than six years ago that the King's daughter had gone to Germany for her marriage with the Emperor but Stephen had not forgotten her. He often wondered whether she ever thought of him... There had been a great bond between them. He had scarcely been able to prevent himself from attempting to seduce her. She would have been willing enough. But she had been only twelve years old when she went away, young in years, but knowledgeable in the ways of the world. Matilda was one of those who appeared to be born with such knowledge. (12)

Words, she thought, charming words. And before the day was out he would be sporting with his newest mistress and telling her she was the most important woman in his life. (18)

The idea of marriage distasteful! The thought of a new woman could never be that. (23)

Often she thought of her cousin Stephen. Was he thinking of her, she wondered, or had he contented himself with his meek little wife? Was he roaming the countryside sporting with mistress after mistress--and doing so, did he ever give a thought to his cousin Matilda? (25)

Perhaps it was not easy for a man who had had more mistresses than any in England to ask a subject to dismiss one. (43)