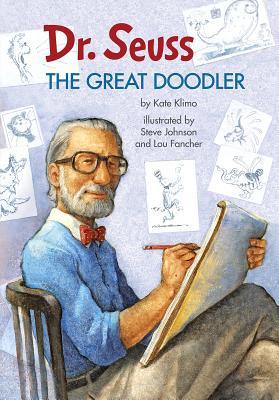 First sentence: It is a beautiful day in La Jolla, California. A writer and artist is at work in his studio. A telephone rings. A reporter is calling with big news. The writer has won a big award for his books. It is the Pulitzer Prize. The writer is Ted Geisel, also known as Dr. Seuss.

Premise/plot: This step into reading (level 3) title is a biography of Dr. Seuss. It is beautifully illustrated. There is a lot of text per page, but it is written in an engaging style for the most part.

My thoughts: I thought this shared plenty of details with young readers. For example, did you know his inspiration for And To Think That I Saw It on Mulberry Street was the droning rhythm of a ship's engine? Did you know that 27 publishers rejected the manuscript?

Other aspects of his life were presented simply. For example his drawings during World War II. In the book, they are presented without question and simply. We were at war or nearly so. He created cartoon drawings and films along with others in Hollywood to "poke fun" of the Germans and Japanese. Some might call it patriotic work, others might call it propaganda.

Today especially out of context, one could say that his work during the war years was racist, offensive, inappropriate. One could conclude that Seuss was a terrible person because at one point in his life he drew these cartoons. How could a man who proclaimed a person is a person no matter how small depict the Japanese the way he did? This book doesn't go there.

The book covers some books, but not all books. Yes to the Lorax and The Butter Battle. You might be surprised that Green Eggs and Ham is not mentioned.

But a couple of things really surprised me. 1) The author makes a BIG mistake. She says he only wrote 44 books. Seriously?! He wrote around sixty books! I should know because I made a yearlong project of reading him chronologically a few years ago. There were plenty of weeks I covered two or three books! 2) She doesn't mention that he wrote under three different names. Why?! How could you write about Dr. Seuss and not mention Theo LeSieg?! I can understand not knowing about Rosetta Stone--the other pseudonym--but the other? Why not include this? It should be common enough knowledge! And if it isn't, it should be! How could you pull together enough research to write the book and not know these two basics?! Did she think it wasn't interesting?

Two of the titles written by LeSieg include Ten Apples Up on Top and I Wish That I Had Duck Feet. The Rosetta Stone title is Because A Little Bug Went Ka-Choo.
© 2017 Becky Laney of Becky's Book Reviews
Posted by Becky at 7:30 AM