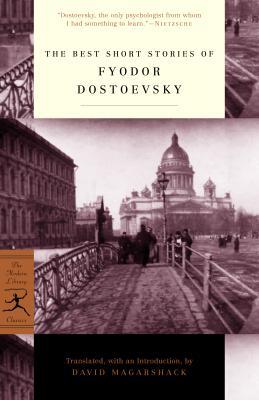 First sentence: It was a lovely night, one of those nights, dear reader, which can only happen when you are young.

My thoughts: White Nights was the first story in the collection and perhaps my favorite. It asks, Is it better to have loved and lost than never to have loved at all? The narrator is a shy dreamer of a man who for a few days and nights finds complete happiness in love or the idea of love. He becomes the confidant of a young, sheltered woman. Promising not to fall in love with her, she begins to tell him her life story. Both hero and heroine are likable and sympathetic. This romance doesn't end happily ever after for our guy but it isn't a bleak story. That is something in its favor considering the others in this collection.

I liked some of the other stories. The Christmas Tree and the Wedding was an odd slightly creepy story. I don't think he meant it to be creepy, just the way things work out sometimes. In it the narrator first relates how he met a young girl at a Christmas party--she was young under thirteen I think--when her future inheritance or dowry comes up in conversation, a man, an adult, boasts that he'll marry her and get her money. He starts pursuing her that night and scares her very badly. The narrator intervenes that night, but years later happens to see these two as bride and groom on the day of their wedding.

I cannot piece together thoughts on Notes From the Underground. I don't know if that is because it was incoherent or if I was. The narrator's outlook on life was angsty, and he was determined to be in a mood no matter what.

A Gentle Creature was an intense, compelling romance. It begins with a distraught man standing over the body of his wife. She jumped out a window. Why? He tries to tell us what happened and why it happened. But is he reliable? Here is a 40 something pawn broker who sees himself wronged by the world in oh so many ways, he rescues an unhappy 16 year old girl about to be sold into marriage by her aunts. He expects gratitude, love, obedience, submission, worship. He wants her to be so beholden to him that every breath is for him and him alone. He doesn't woo her, he believes in sternness and silence and teaching her according to his grand plan. He frowns whenever she talks or expresses emotion or outbursts. He won't let her out of the house. He is hopeful that with training things will fall into place and perfect bliss will be his. Needless to say, i didn't like him at all!

The last story also deals with suicide--well, attempted suicide. A man is minutes away from shooting himself when he has a dream, a remarkable dream, that he is convinced is TRUE. Heaven on Earth is achievable. Perfect happiness can be ours for the taking--man is not evil inherently, but is perfectable.


Let us suppose, gentlemen, that man is not stupid. But if he is not stupid, he is monstrously ungrateful. (119)

Life is sweet even in sorrow. It's good to be alive, however hard life is. (177)

All man wants is an absolutely free choice, however dear that freedom may cost him and whatever it may lead him to. (116)

Once you have recognized the truth and seen it, you know it is the one and only truth and that there can be no other, whether you are asleep or awake. (271)

I love Dostoevsky and the review was terrific... I remember in my college days when i used to read Crime and Punishment and it changed my life...

Read my blog too, I think you will love it -