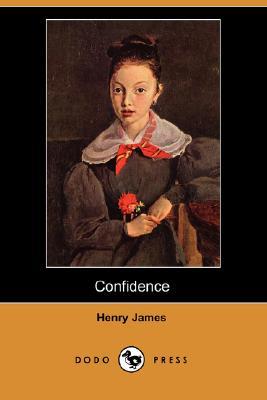 Confidence. Henry James. 1879. 224 pages. [Source: Bought]
First sentence: It was in the early days of April; Bernard Longueville had been spending the winter in Rome.

Technically, Bernard meets her first. Their meeting is oh-so-brief. He sketches her, a stranger, a beautiful woman, on the street. He gives the sketch to her--or perhaps to her mother. Weeks later, Bernard is called to visit his scientist-friend Gordon. Gordon is keeping company with a handful of people, and, he's even considering marriage. He wants his friend's opinion. The company he keeps: Angela Vivian and her mother, Mrs. Vivian; Blanche Evers, a woman as silly as she is beautiful, and Captain Lovelock. Bernard recognizes Angela right away. She acts as if she's never seen him, never spoken to him. And the mother does the same thing!

What does he think of her?! What a question?! He doesn't exactly know what kind of woman she is. If she's after his money--Gordon is very wealthy--or if she genuinely likes Gordon. She doesn't act overly in love with him. And she certainly can flirt--when she's of the mind to--with HIM. He can't advise his friend to marry her--at least not right now.

Months later--perhaps even a year later--he hears from Gordon again. Gordon has married married. He's married to Blanche. Bernard has been invited to visit them both when he has the chance...

Bernard soon tires of their company. Well, soon is a relative term, I suppose! He stays in their home three months!!! He travels several places before returning to Europe, to France, I believe? Anyway, he meets Angela and her mother again. This time he finds himself head over heels in love with her. Perhaps he was slightly in love with her before but not wanting to admit it to himself or to his friend?!

What will Gordon do when he hears the news that the two will marry soon?! (You might be thinking, why is it any of his business? After all, he's married. He shouldn't still be lusting after Angela!) But Gordon has a very dramatic reaction....can Angela outwit him?

My thoughts: I like this one. It's a very silly romance. I admit that much is true. But there's a lightness to it that I appreciate.


“I want to marry with my eyes open. I want to know my wife. You don’t know people when you are in love with them. Your impressions are colored.” “They are supposed to be, slightly. And you object to color?”


“If I have seemed uncivil, let me make it up. When a woman speaks of giving up society, what she means is giving up admiration. You can never have given up that — you can never have escaped from it. You must have found it even at Sorrento.” “It may have been there, but I never found it. It was very respectful — it never expressed itself.” “That is the deepest kind,” said Bernard. “I prefer the shallower varieties,” the young girl answered. “Well,” said Bernard, “you must remember that although shallow admiration expresses itself, all the admiration that expresses itself is not shallow.”


But you don’t want to keep smelling a flower all day, even the sweetest; that's the shortest way to get a headache.

“An opportunity to be wise — not to be foolish!” “Ah, there is only one sort of opportunity,” cried Bernard. “You exaggerate the reach of human wisdom.”

Since Gordon had determined to marry a little goose, he had chosen the animal with extreme discernment. It had quite the plumage of a swan, and it sailed along the stream of life with an extraordinary lightness of motion. He asked himself indeed at times whether Blanche were really so silly as she seemed; he doubted whether any woman could be so silly as Blanche seemed. He had a suspicion at times that, for ends of her own, she was playing a part — the suspicion arising from the fact that, as usually happens in such cases, she over-played it. Her empty chatter, her futility, her childish coquetry and frivolity — such light wares could hardly be the whole substance of any woman’s being; there was something beneath them which Blanche was keeping out of sight. She had a scrap of a mind somewhere, and even a little particle of a heart.

The soul is a still more tender organism than the body, and it shrinks from the prospect of being subjected to violence.

“I particularly dislike receiving apologies, even when I know what they are for. What yours are for, I can’t imagine.”

“If pride is a source of information, you must be a prodigy of knowledge!”