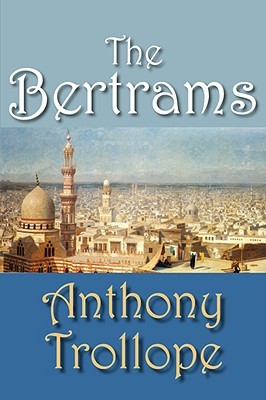 First sentence:  This is undoubtedly the age of humanity — as far, at least, as England is concerned.

Premise/plot: The Bertrams chronicles the adventures and misadventures of three men: George Bertram, Arthur Wilkinson, and Sir Henry Harcourt. The novel, as a whole, has a feel of a proverb or two--for better or worse.

George Bertram starts off the novel as an academic success. But school is now behind him, his future awaits. And with each month that future seems dimmer not brighter. He doesn't know what to do next. Should he enter the church and become a clergyman? Should he become a lawyer? Whose advice should he take? His rich uncle's advice? his friends? a beautiful woman that he just met? his own heart?

Arthur Wilkinson is disappointed that he didn't do better at school, that the results of his last exams didn't go as well as he hoped. It looks like it will definitely be the church for him, but, he's not hopeful that he'll do well enough to marry. When his father dies, he does get a living, and it's enough to support his mother and sisters. But not his mother, sisters, wife, and future children--should he stop dreaming of his own happiness?

There are two heroines in this novel. Adela Gauntlet is the neighbor and most special friend of Arthur Wilkinson. Any fool could see that she loves him madly, unconditionally. She's his for the taking. But will he ever propose? Will Arthur's stubbornness keep them both miserable? Caroline Waddington is the beautiful woman that George Bertram happens to meet on his travels. The two fall in love in the Middle East. It is her advice he follows. She can't imagine herself marrying a clergy man! So he decides for the law instead. But will these two get their happily ever after? Not if Harcourt has his way. He's super-impressed by his friend's fiancee. He just has to get to know her better! Now Caroline, unlike Adela, has a flaw. And it's a flaw that she shares with her grandfather and with Harcourt. That flaw is a LOVE OF MONEY and a longing to be thought of as GREAT. Will Caroline throw away her chance for happiness because she wants too much?

My thoughts: Normally I don't find Trollope's novels too wordy, in need of great editing, but I might make an exception with The Bertrams. I felt there were whole chapters--whole sections--that didn't really contribute much to the story. Perhaps because I felt such a huge disconnect with the main characters. These were characters that were--with a few exceptions--not that pleasant to spend time with. I didn't find many kindred spirits in this one. And the book was a journey in more than one way. It wasn't just a figurative rambling journey with characters that I didn't care much for. It was a literal journey as well. George goes on two journeys. One journey is at the beginning of the novel. It takes him to the middle east; one of the places he spends a good amount of time in is Jerusalem and its surrounding areas. The second journey is towards the end of the novel. It takes him to Egypt. Trollope weighs down his novel with descriptions of these "exotic" places, tourists attractions, and local curiosities. Let's just say that his descriptions of the local residents are not politically correct.

I also did not like George Bertram's religious views.

Not everyone in Trollope's novel gets a happy ending. I was okay with this, for the most part.